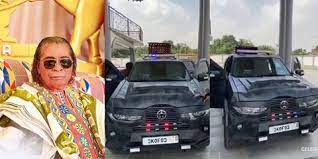 The Omanhene of the Kumawu Traditional Area, Barima Safo Tweneboah Kodua, has urged the government to increase its purchase of Kantanka vehicles to enable the company to expand further and create more employment opportunities.

He said once that was done, the government could put a system in place through which groups such teachers and nurses, among others could procure the vehicles on hire purchase basis.

"I am impressed with what Apostle Kwadwo Safo Kantanka has done and I am so happy about that and I think the government needs to support him through every means possible," he said.

The event saw the exhibition of some vehicles and items manufactured by the group over the last 40 years.

It was on the theme: "Positioning the Church in Nation Building - Solving Societal Problem Through Religion, Science and Technology".

At the event, Kantanka Automobile presented a pick-up vehicle to the Ghana Armed Forces (GAF) to beef up its fleet of vehicle.

Barima Tweneboah said Africans were also bestowed with the creativity and knowledge to manufacture good and that being black did not mean that they were daft.

The Chief Executive Officer of the Kantanka Group of companies, Mr Kwadwo Safo Jr. said the company's definition of transformational mindset began with the belief that one could achieve anything he/she set their mind to do.

He said the company was proud to come this far in using science and technology to help build the country and the continent.

The Vice Chancellor of the University of Health and Allied Sciences, Prof. John Gyapon, who chaired the event, said n the early years of the Church, the relationship between it and science was cohesive than today.