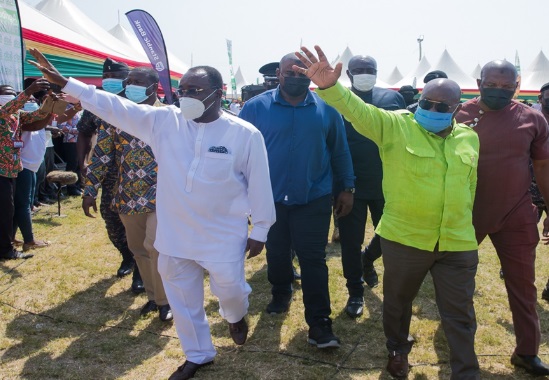 The President, Nana Addo Dankwa Akufo-Addo, says the government will work to consolidate the gains made in the agricultural sector.

That would be done through the implementation of equitable and sustainable food systems to improve the nation's food security, he said.

The President noted that the need to build a robust food system that could withstand shocks was of the greatest importance, saying, “consolidating and strengthening our food systems has become even more critical in the light of the COVID-19 pandemic.”

"Obviously, the COVID-19 pandemic continues to disrupt the global food supply chain which has exposed the vulnerability of the food systems worldwide,” President Akufo-Addo added.

Addressing a durbar yesterday to mark the National Farmers Day celebration in the Central regional capital, Cape Coast, President Akufo-Addo recounted the various policy and programme interventions over the past five years, indicating that since 2017 the government had set up a plan to transform the agricultural sector through investments in integrated and mutually reinforcing measures which were yielding positive results.

On the theme: “Planting for Food and Jobs — Consolidating Food Systems in Ghana”, the celebration had regional and district editions held across the country.

Some of the sponsors of the national event are the Agricultural Development Bank (ADB), the headline sponsor, and Stanbic Bank Ghana Ltd.

"The central pillar of government's transformative policy through the Planting for Food and Jobs (PFJ) programme has been strategically designed to take advantage of the huge potential in the agricultural sector," President Akufo-Addo stated.

He said agricultural mechanisation had also been identified as an important intervention to increase efficiency in the sector.

President Akufo-Addo said complementary programmes such as the revitalisation of the National Food Buffer Stock Company to improve market access as well as investments in warehouses to store farm produce had been undertaken.

Additionally, he said, the One Village, One Dam policy to increase water availability for all-year production and the One District, One Factory (1D1F) initiatives to promote industrialisation had all contributed to the successes chalked up by the government in the agricultural sector.

"The record in the agricultural sector is very impressive,” the President said, adding that "we have achieved a yearly average growth of 5.8 per cent from 2017 to 2020 as compared to the 2.7 per cent growth inherited in 2016.”

"A total of 1.4 million tonnes of fertilisers and 91,000 tonnes of certified seeds have been made available to farmers since 2017," he stated, saying that the number of beneficiary farmers was currently 1.7 million from an initial number of 207,000 farmers in 2017.

President Akufo-Addo added that the Planting for Exports and Rural Development (PERD) had also made gains in the development of six strategic tree crops, namely rubber, oil palm, cashew, mango, coconut and shea, meant to diversify and augment the country’s export earnings.

He said under the Rearing for Food and Jobs programme thousands of different species of livestock had been distributed to seven national livestock breeding stations in 196 metropolitan, municipal and district assemblies.

The President said the move was aimed at expanding domestic meat production and reducing the huge annual import bill for meat and other meat products of about $300 million.

To address the challenge of access to credit by farmers and fisherfolk, a lending scheme had been established to ensure guaranteed loans to them for which GH¢273 million had been disbursed to farmers, he said.

Again, Cabinet had approved the recruitment of 1,100 veterinary officers under the Ministry of Food and Agriculture.

The President indicated that 2,800 farmers had been registered for the pension scheme, which had been scaled up to cover farmers across the nation.

In spite of the achievements, President Akufo-Addo said more remained to be done to bring the sector at par with sectors in developed countries.

He gave an assurance that the government would take the requisite measures to address the challenges of climate change to ensure that agriculture continued to grow on an accelerated trajectory.

The government was also developing a framework to provide incentives to enable financial institutions to extend loans for agro-business development and for the production of five million broiler birds by the end of December.

The President said land tenure was also being looked at to help create land banks to enable investors to easily access lands.

President Akufo-Addo expressed concern about the shortage of fertiliser on the world market and said it had called for the need to produce fertiliser locally, a challenge the government was working on.

He said the government was working with a Moroccan conglomerate to test soils for the production of fertilisers specific to the soil type.

The Minister of Food and Agriculture, Dr Owusu Afriyie Akoto, for his part, said the government would continue to adopt strategies to promote agronomic measures that would help farmers to optimise potential and maximise outputs.

He, therefore, urged farmers to resort to the use of organic fertilisers as a way to reduce the cost of production and maximise profit.

Dr Afriyie-Akoto said while putting in place support for farmers and fishers, the government would also ensure that farming was mechanised and improved to aid production.

He said that the celebration of the National Farmers Day was not only for the food they produced but the nation was equally grateful to them for raking in scarce foreign exchange and supporting the country's industrialisation drive.

The Minister of Food and Agriculture stated that in spite of the major contributions of farmers and fishers to national development, it was no secret that the sector was faced with challenges such as climate change and the COVID-19 pandemic, among others.

"Due to the challenges confronting the agricultural sector, there is the need for innovative strategies to safeguard our national food security," Dr Akoto said.

He said, luckily, the government was firmly on the path to building a resilient and equitable food security system that could withstand shocks, as evidenced in the various interventions in the agricultural sector.