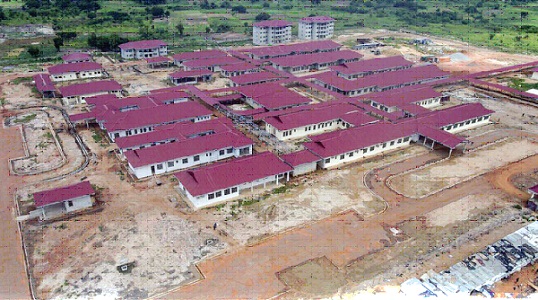 Euroget De Invest S.A, the firm building a number of hospitals for the government, has filed an application at the Accra High Court seeking to stop the execution of a $5million judgment debt against it by one of its subcontractors, Top International Engineering Ghana Limited.

Euroget was ordered by the International Court of Arbitration to pay Top International Engineering more than $8million for failure to pay the subcontractor for certain works. The arbitration award was adopted by the Accra High Court in a dispute between the two.

Euroget is arguing that the government has delayed in paying it and therefore it had also been unable to pay the rest of the amount.

In an affidavit in support of the application deposed by the Chief Executive Officer (CEO) of Euroget, Dr Said Derez, the construction firm claims that in spite of Top International Engineering being aware of its difficulties, it went ahead and served an amended entry of judgment on a non-permanent staff of the company instead of the CEO.

The company also argues that Top International started the second execution process without permission from the court, and therefore the amended entry of judgment and execution are “incompetent and ought to be set aside”.

In its response, Top International Engineering has urged the court to dismiss the application, describing it as without merit and an attempt by Euroget to delay and frustrate it from collecting the money.

It argued that the two sides went into terms of settlement for the money to be paid in instalment, but Euroget “failed to respect the said agreement,” which forced it to garnishee the accounts of Euroget.

Top International Engineering added that the amended entry of judgment was to reflect the outstanding amount Euroget was supposed to pay after the garnishee proceedings, and that there was no rule of court that it had not be served personally on Dr Derez.

It also refuted claims by Euroget that it was aware of delay in government paying Euroget to enable it settle its debt.

The arbitration award was adopted by the High Court as its final judgment after the two sides agreed that that should be the means to settle a legal dispute which started at the High Court in 2017.

The dispute between the two firms is connected to two hospitals being constructed by Euroget — the 500-bed military hospital at Afari, Kumasi, and the 60-bed hospital in Konongo, both in the Ashanti Region.

Top Engineering had argued that it provided some engineering services at the military hospital at a contract sum of more than $12 million, but Euroget paid it $7.5million.

With regard to the hospital in Konongo, Top Engineering said the contract sum was more than $7.5 million, but Euroget paid it $4.8 million.

Euroget also made a counter-claim against Top Engineering and argued that the engineering firm delayed in completing its services as agreed between the two parties.