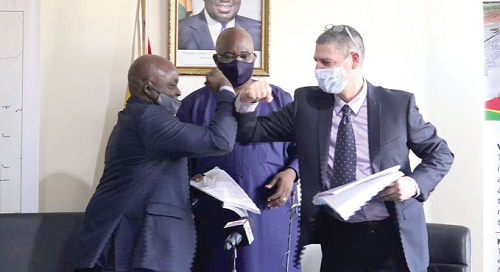 The contract covers 102 kilometres of continuous single-track railway line, an initial workshop facility at a location to be specified by the government and an initial complement of rolling stock.

The government, represented by the Minister of Railways Development, Mr Joe Ghartey, last Wednesday signed the contract with Amandi, represented by its Managing Director, Mr Nadav Simhoni, for the standard gauge between the Takoradi Harbour and Huni Valley in the Western Region.

Speaking at the signing ceremony in Accra, Mr Ghartey said the deal was the single largest rail contract in the country’s post-independence history.

He said the project was expected to start in October this year, to be completed in 42 months.

He said the indicative scope of the works included the construction, provision, testing and commissioning of the construction of approximately 8km of standard gauge railway tracks connecting the existing dual gauge tracks in Takoradi to the Takoradi Port for easy and efficient access for cargo.

There would also be the conversion of 10.6km dual gauge tracks between Takoradi and Kojokrom from narrow gauge to standard gauge, he said, adding that “this shall include conversion works and materials involved and the supply of 10 new gauge turnouts”.

The project, he said, also included 10 kilometres of loop lines and stations and double lines to improve availability of the line for express trains.

The minister added that other activities would be undertaken under the project, such as the supply of standard gauge track maintenance equipment, the construction of a workshop facility for standard gauge rolling stock, including the basic fit-out, basic tools and essential machines.

He said funds had been earmarked for initial costs, employer and engineer’s costs and supervision facilities, including the acquisition of land and the payment of compensation to affected people.

Mr Ghartey recounted that from 2012 to 2017, a narrow gauge line was constructed from Sekondi to Takoradi.

“Therefore, even though it commenced in 2012 and was completed in 2017, barely three years, we have to convert it to standard gauge, in line with the policy that all new constructions of railway will be standard gauge,” he said.

A standard gauge railway has a track gauge of 1,435mm. Also known as the Stephenson gauge, International gauge or uniform gauge, it is the most widely used railway track gauge across the world, as about 55 per cent of the lines in the world use it.

All high-speed rail lines use standard gauge, except those in Russia, Finland, Portugal and Uzbekistan.

The distance between the inside edges of the rails is defined to be 1,435mm, except in the United States and on some heritage British lines, such as those in Ghana, which are now being changed to standard gauge.

For his part, Mr Simhoni said Amandi was ready to support the government to develop the railway sector.

He said the company had extensive experience in construction and civil engineering works, as it was responsible for the construction of the 15km Sekondi-Kojokrom line, the 22km Kojokrom-Manso line and the 4km Asaprochona line.

He added that Amandi was also undertaking a number of port infrastructural projects at the Takoradi Port and, therefore, had the capacity to execute the ECPF contract.

The agreement, however, will have to satisfy the conditions precedent for the release of funds.

The conditions include approval by Parliament and the completion of the Environmental and Social Impact Assessment (ESIA) and Value for Money Audit.

The Ministry of Finance had already approved the terms and conditions of the loan and the ESIA was being undertaken by an independent company, the ministry said.

“We want to work hard to complete all the conditions precedent in October. It is because the Ministry of Finance has approved the terms and conditions of the proposed loan, paving the way for the signing of the commercial agreement,” a source at the Ministry of Railways Development told the Daily Graphic.