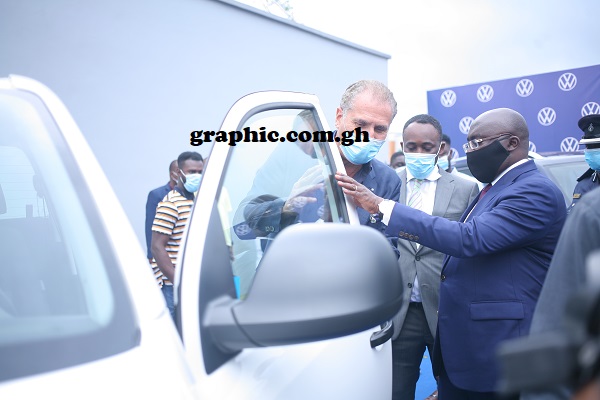 The government has tasked commercial motorcycle riders, popularly known as Okada, to graduate from the risky and less safe venture to a safer means of transportation.

The Vice-President, Dr Mahamudu Bawumia, who made the call, said the government would not legalise commercial motorcycles because the riders would have a better option by acquiring newly assembled vehicles in the country through a lease arrangement.

Dr Bawumia, who witnessed the signing of a strategic memorandum of understanding (MoU) between Volkswagen Ghana and BlackIvy, a residential and industrial estates entity, in Accra yesterday, emphasised the need for safe and reliable cars in the country.

The collaboration between Volkswagen and BlackIvy will, among other things, lead to the introduction of the first compressed natural gas (CNG) for vehicles, and further down the road, electric vehicles and relevant infrastructure such as CNG filling and electric charging stations.

With a presence in Ghana, Kenya and Tanzania, BlackIvy is a value-driven company that builds and grows commercial enterprises in sub-Saharan Africa.

It develops logistics and infrastructure solutions for emerging economies and businesses that serve the needs of the growing consumer class.

The Vice-President said Ghana spent up to $230 million every year treating injuries and traffic fatalities.

Very often, the cars involved in the crashes do not meet road safety standards.

Dr Bawumia said the transport sector recapitalisation project of the government was part of an integrated and coherent policy it was putting in place for the transformation of Ghana and the automotive sector and other sectors of the economy.

That, he said, was meant to encourage the replacement of very old vehicles with new ones because “our trotros, buses and taxis tend to be quite old because the drivers tend to have very little capital to buy newer vehicles and so they are kept out of that market”.

He said under the recapitalisation project, the proposal was for the government to step in to provide support for commercial drivers to be able to lease new vehicles being made in Ghana.

“So we need the demand to be here, but a lot of our drivers do not have the capital and so the transport sector regeneration project will essentially help the leasing companies to provide the new vehicles for commercial drivers, who can even use their old vehicles as down payment, and they will then have the new vehicles which they can pay for over a period of time,” he explained.

“It will save the country a lot, as it spends $230 million a year taking care of road accident victims,” he added.

The Vice-President said the project would increase the supply of new vehicles in the country, “so we will rather encourage the Okada riders to come in and try to lease these vehicles, so that they can run their own businesses.

“They need to graduate from this risky and less safe Okada riding to safer means of transportation. Their problem will be lack of capital, but if we bring in a new leasing policy, with the national ID card and our digital address system we can have our credit system working, instead of this risky business,” he clarified.

Reflecting on President Nana Addo Dankwa Akufo-Addo’s Ghana Beyond Aid vision, Dr Bawumia called for a rethinking and a new pathway if the structure of the economy was to change in beneficial ways.

“Ghana Beyond Aid envisages a path of transformation that builds on value addition, whether it is in the agricultural or the minerals sector. It envisages a diversified economy attracting investments in other activities in the economy that also leverage our comparative advantage.

“Today is a celebration of what can be done in Ghana. What we are launching today is in line with the Ghana we want to build — vibrant and diversified, inspired by the vision of a Ghana Beyond Aid,” he stressed.

“A safe car and a comfortable home should not be a luxury. We look forward to working with Volkswagen and BlackIvy and other companies to help introduce new leasing options and financing plans to Ghana,” he said.

The Chief Executive Officer of Volkswagen Ghana, Mr Jeffrey Oppong Peprah, said the aim of the company was to promote the automobile industry in sub-Saharan Africa, for which reason it was entering into partnerships with like-minded organisations such as BlackIvy.

He said both institutions would access the viability of reducing carbon emissions with CNG filling stations for commercial vehicles.

The pilot, he explained, would be the first in West Africa.

Mr Peprah said the signing of the strategic collaboration was another strong indication of VW’s commitment to contribute to the future and modernisation of the automotive industry in Ghana.

For his part, a Deputy Minister of Trade and Industry, Mr Robert Ahomka-Lindsay, said the government was committed to developing an integrated automobile industry and hinted that six new automobile assembling companies were coming into the country.