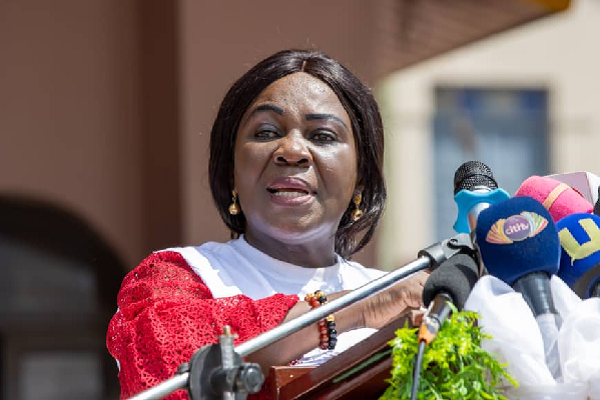 The Minister of Sanitation and Water Resources, Ms Cecilia Abena Dapaah, said the additional funding followed the successful implementation of GAMA’s Sanitation and Water Project, which had provided access to improved toilet facilities to serve over 275,968 people in 34,496 households in low-income communities.

At the commemoration of the 2021 World Toilet Day in Kumasi last Friday, Ms Dapaah said the household toilet initiative had significantly reduced open defecation hence the additional funding to enable the ministry to expand its sanitation agenda.

The global theme for this year’s event was “Valuing Toilets”.

In recognition of the country’s prevailing circumstances, the ministry adopted the theme: “Stop open defecation, own a household toilet now; Let’s play our part in a COVID-19 era”.

The day was to unite mass action against the indiscriminate handling and disposal of faecal matter and its attendant effects on the environment and health.

The event also recognised the fact that toilets were underfunded, poorly managed or neglected in many parts of the world with devastating consequences for health, economics and the environment, particularly in the poorest and most marginalised communities.

The ceremony attracted many dignitaries, including the Ashanti Regional Minister, Mr Simon Osei Mensah; the Metropolitan Chief Executive of Kumasi, Mr Sam Pyne, and a former Vice-Chancellor of the University of Energy and Natural Resources (UNER), Professor Mrs Esi Awuah.

Also in attendance were some traditional leaders, the clergy, Muslim leaders and the general pubic.

“The project will also expand and rehabilitate the Asafo Sewerage System in Kumasi,” she added.

Ms Dapaah said the ministry, in collaboration with other stakeholders in the Water, Sanitation and Hygiene sector, had delivered more than 124,952 household toilets constructed across the country.

Ms Dapaah noted that statistics from the Ghana Statistical Service indicated that 22 per cent of the country’s population practiced open defecation, whilst only 21 per cent had access to improved sanitation, hence the government’s commitment to ensuring that this basic human right to access decent toilet facility was pursued with all seriousness.

She said it was a fact that in a community where some people did not have access to safe toilets, every other person’s health was threatened.

Making a case for young girls, the minister noted that a report titled “Out of Order — The State of the World’s Toilets 2017” published by Water Aid in 2017 indicated that proper sanitation facilities were also instrumental for women and girls during menstruation.

“Girls who don’t have decent toilets at school or near home have to defecate in the open or use unsafe, unhygienic toilets, often shared with boys,” she stated, explaining that aside the health risks, this was uncomfortable, embarrassing and put them at risk of verbal and even physical abuse.