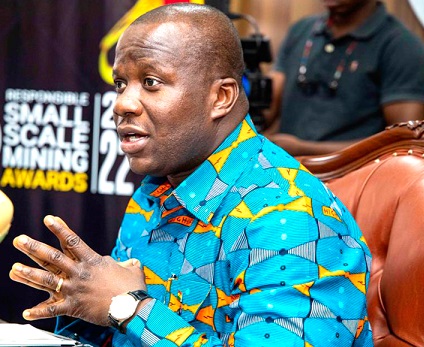 In spite of its complexity and the extreme difficulty in dealing with illegal mining, the government will continue to review the interventions and also devise new strategies that will eventually help stem the tide.

This is because the government is determined not rest on its oars until the fight against the phenomenon, popularly known as galamsey, is won.

The Minister of Lands and Natural Resources, Samuel Abu Jinapor, gave the assurance and also said the government’s intervention to deal with the menace should not be misconstrued as a ploy to get people out of work as small-scale mining sector was recognised as a key component of the country’s mining ecosystem.

The minister indicated that the SSM sector contributed about 40 per cent of the country’s gold output, so conscious and sustained efforts would be made to eradicate irresponsible mining practices that had adverse impact on the environment and people's sources of livelihood.

"This must not be misconstrued to mean that the Akufo-Addo government is against small-scale mining; we will promote responsible small-scale mining but we are also committed to fighting all illegalities to help sanitise the sector," the Minister, who is also the Member of Parliament (MP) for Damongo, stressed.

Mr Jinapor, therefore, urged stakeholders to collectively work to stamp out the illegal practices in the SSM sector, strongly warning that persons who were caught fuelling the galamsey menace would be dealt with by the law.

The minister was speaking at the launch of the 2022 edition of the Responsible Small-scale Mining Awards (RSMA) in Accra last Friday.

The RSMA is an initiative of the government, through the Lands Ministry, that seeks to use a reward system to promote responsible mining.

Explaining the rationale for the award scheme, Mr Jinapor said while efforts were being made to clamp down on illegal mining activities, it was equally important to promote legal and responsible small-scale mining by putting in place a motivation system that would reinforce best practices in the SSM sub-sector.

The General Secretary of the Ghana National Association of Small-scale Miners (GNASSM), Godwin Armah, commended the government for introducing the awards scheme.

He said the award scheme would motivate players in the small scale mining sector to strictly adhere to the rules of the game, knowing that their compliance would be recognised.

He called on all persons in the SSM business to put the country’s interest above their parochial gain by mining responsibly and helping to weed out miscreants whose activities were destroying land and water resources.

Mr Armah said the GNASSM was committed to supporting the government's effort to flush out illegal miners, which was why the association had embarked on separate projects to fight the illegality.

For instance, he said in complementing the government's effort to fight galamsey, the GNASSM had rolled out a project to fight the menace on the Birim River.

He appealed for the support of the Lands Ministry to sustain the project.