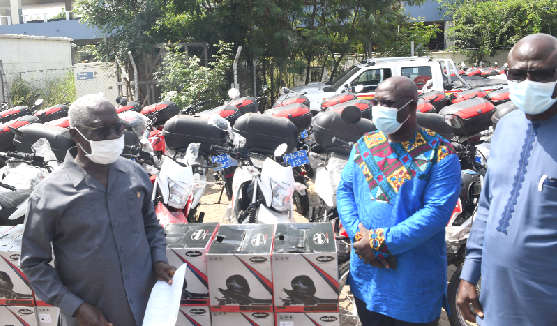 The government has presented 10 vehicles and 120 motorbikes to the Births and Deaths Registry (BDR) to facilitate improved performance and service delivery.

The vehicles and motorbikes were procured with funds secured from the World Bank for the Public Sector Reform for Results Project (PSRRP).

The PSRRP is a government initiative established to support the National Public Sector Reform Strategy in its work.

The project would assist 16 selected ministries, departments and agencies (MDAs) to improve on their efficiency and effectively account on key public services provided to the public and business organisations.

At a ceremony to present the vehicles in Accra yesterday, the Senior Minister, Mr Yaw Osafo-Maafo, said the government’s handout marked a significant stage in the PSRRP’s development.

''The people, including those working in the private sector, expect public sector workers to be more responsive to their needs, particularly with regards to how fast public services are delivered and how people and businesses can make use of the system to improve growth of the economy,” he said.

Mr Osafo-Maafo said as part of the reform agenda, the Births and Deaths Registry would upgrade its website and roll out mobile applications that would allow people to remotely access births and deaths registration services.

The application, he said  would in addition have a grievance redress mechanisms among other PSRRP solicitations.

The senior minister urged the management and staff of the Births and Deaths Registry to take good care of the vehicles, motorbikes and equipment attached to them  and use them prudently.

He said capturing accurate data on date of birth was a problem the public sector was faced with, adding that, if dates of births and deaths were recorded correctly, it would make management of population census in the country easy.

The Acting Registrar of the Births and Deaths Registry, Rev. Kingsley Asare Addo, received the keys to the vehicles and motorbikes and thanked the government and the World Bank for the equipment.

He said the vehicles had come at a good time and would give the office a new face and a friendly outlook.

He said the vehicles and motorbikes would be deployed to the six newly created regions and also to some deprived districts to implement mobile registration exercises.

The Deputy Minister of Local Government and Rural Development, Mr Kwasi Agyei Boateng, said the equipment would support the Births and Deaths Registry to discharge its role effectively and urged the registry’s management to take good care of the vehicles.