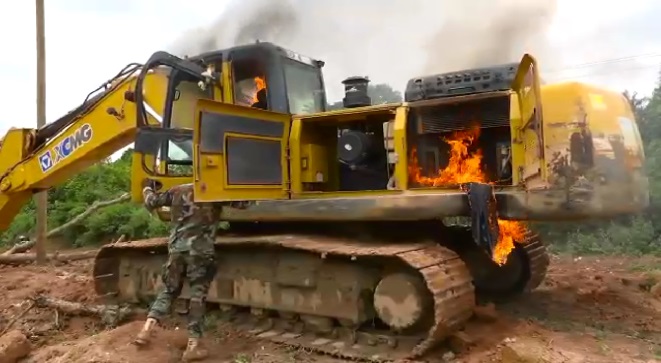 Pressure group OccupyGhana has faulted government’s approach to torch equipment seized at illegal mining sites, saying the method is a brazen illegality that should cease forthwith.

Again, the group says the failure of the security agencies to bring persons arrested for indulging in illegal mining (galamsey) to face the law undermines the whole exercise of fighting the menace.

Describing government’s attempts to fight galamsey as “epileptic and faltering”, OccupyGhana in a statement issued Tuesday, says the attempt “gives the impression that it is unwilling to follow and apply the law.”

According to OccupyGhana, the Minerals and Mining Act provides adequate sanctions, including fines and terms of imprisonment for infractions of the law, and is specific “that equipment used in any of these offences is required to be first seized and kept in police custody. Then, when the person using the equipment for the illegal mining activity is convicted, the court will order the forfeiture of the equipment the state. Then the Minister has 60 days within which to allocate the equipment to a state institution. There is absolutely no legal room for simply torching the equipment. It is illegal and must stop forthwith.

“We think that all the efforts to end illegal mining will not achieve anything until we resolve to simply enforce the law. If the security agencies make arrests and the law is not applied, it weakens their resolve and says to all that we are not serious about ending this menace. And the judiciary should need no encouragement to try cases with dispatch so that Ghanaians can see results in real time. It cannot be business as usual.