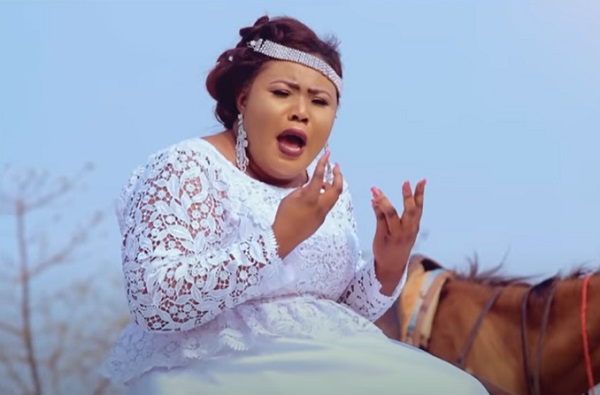 Screengrab of Ohemaa Jacky in her Hakuna Matata music video

Ghanaian gospel musician, Jacklin Sarfo Gyamfua aka Ohemaa Jacky, has been remanded by an Accra Circuit court for allegedly defrauding a trader of GH₵ 150,000 under the pretext of securing the latter with an Italian passport and resident identity cards.

According to state prosecutors, the “Hakuna Matata” singer who doubles as a blogger, also forged two Italian passports for the trader and her infant daughter.

She was slapped with two counts of defrauding by false pretence and forgery when she appeared before the court presided over by Ms Evelyn Asamoah.

She has, however, pleaded not guilty to the charges and has since been remanded to police custody to re-appear on September 16 this year.

The facts as presented by the prosecutor, Inspector Frederick Sarpong, were that, in February this year, the complainant and a witness in the case spotted the musician running adverts on social media platforms purporting to be securing travelling passports and resident identity cards of every country within the European Union (E.U) at a fee.

The prosecutor said the trader, who is the complainant was interested in travelling to Italy and contacted Ohemaa Jacky through her Facebook advertisement.

He said Ohemaa Jacky promised to secure two Italian passports and two Italian resident identity cards for the complainant and her infant daughter at a fee of €24,000.

He said Ohemaa Jacky then requested the complainant to pay the demanded fee of €24,000 into any of the above-mentioned accounts.

The complainant accordingly deposited various sums amounting to €21,000 into the accounts provided by the accused.

On March 30, 2021, the prosecutor said the complainant presented the Italian passports at the Kotoka International Airport to travel outside the country and was apprehended on the basis that the passports presented were fake.

The Prosecutor said a complaint was lodged to the Police leading to the gospel musician’s arrest on September 8.

He added that investigations were ongoing to ascertain the authenticity of the passports and the resident identity cards.

“However, the accused and her husband have issued stern verbal warnings to both the complainant and the principal witness in the case to stay off the case else they risk being dealt with,” the Prosecutor said.