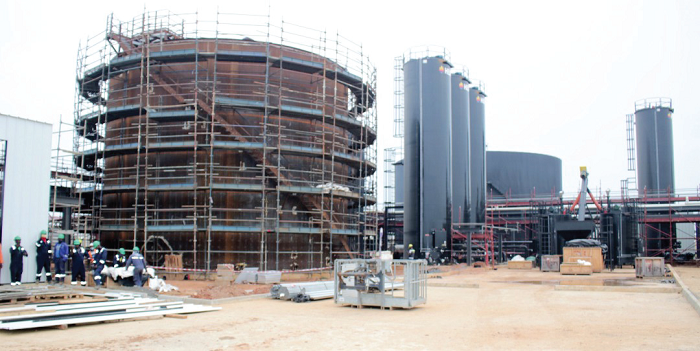 A bitumen plant under construction by state-owned oil company, Goil, is expected to be completed in September this year.

Currently, 82 per cent of the work — which is being done in partnership with Societe Multinationale de Bitumes (SMB) of Cote d’Ivoire — has been completed, according to the managers of the project.

The plant, expected to have a storage capacity of 6,000 metric tonnes of base bitumen, is being constructed at $35 million, and will have a production capacity of 240 metric tonnes per day for each of the bitumen emulsion and the polymer modified bitumen (PMB) plants.

Ghana presently imports bitumen — which reportedly costs the country an average of $11.8 billion yearly — from Cote d’Ivoire and Brazil for road projects.

The Technical Consultant to the Group Chief Executive Officer (CEO) of Goil, Mr Ben Torkornoo, said the company would control a 60 per cent stake in the business, while SMB, which would supply the raw bitumen materials, would have a 40 per cent share.

Mr Torkornoo made this known last Wednesday when the Minister of Roads and Highways, Mr Kwesi Amoako Atta, visited the facility to familiarise himself with operations.

The PMB is a combination of asphalt and more polymer materials and is said to be appropriate for road pavements that experience heavy-duty traffic and extreme weather conditions.

Already, the loading racks, boilers to process the raw bitumen and the PMB and emulsion production plants have all been installed at the facility, along with a control centre, with provisions made for future expansion of the storage tanks.

Mr Torkornoo indicated that installation works on a three-kilometre pipeline from the oil jetty at the Tema Port to the bitumen facility were also underway to allow for product pumping to the facility when the project is eventually inaugurated.

The Head of Technical Services at Goil, Mr Alphonso Okai, said the PMB would prevent road deformation and rutting.

The PMB, he stressed, ensured durability of roads, citing the N1 Highway spanning the Tetteh Quarshie Interchange to the Mallam Junction in Accra as an example of a PMB-surface road.

Mr Amoako Atta said the government would be the major purchaser of the products for its road projects.

“Bitumen, by all standards, is very key to our operations, and I am excited that we will have our own production facility, which will go to significantly reduce our import from Cote d’Ivoire and sometimes Brazil.

“My understanding is that the facility can produce the different bitumen grades we will need for our projects. The ministry is obliged to consume what is being produced by the company, and we will create an avenue where foreign contractors working on projects in the country will source their bitumen requirement from the facility by way of a technical policy that we will create,” the minister added.

The Group CEO of Goil, Mr Kwame Osei-Prempeh, said the investment became necessary so we could develop the bitumen value chain in the country.

He expressed the hope that the project would considerably reduce Ghana’s reliance on the importation of the products.