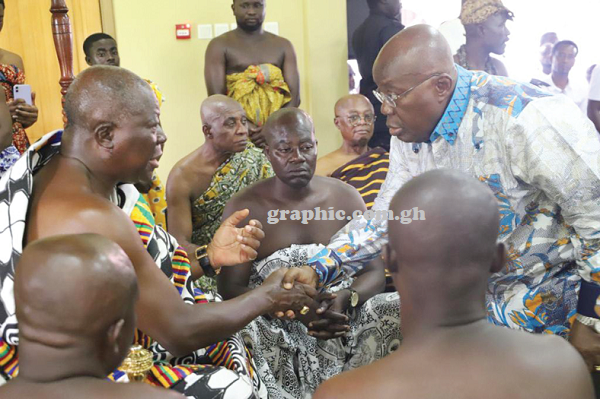 The Asantehene, Otumfuo Osei Tutu II, has urged President Nana Addo Dankwa Akufo-Addo to go out and tell the success story of his administration.

He said it was always important for the President to let Ghanaians know what he had been able to achieve, so that the people would appreciate his works.

The Asantehene said this when the President called on him at the Manhyia Palace on Sunday (October 16, 2022) at the start of his four-day official visit to the Ashanti Region.

Otumfuo Osei Tutu said it was good that the President was in the region to inspect development projects undertaken by the government and wished him well on his visit.

He also expressed appreciation to President Akufo-Addo for making it a tradition to seek his blessing at the Manhyia Palace before embarking on official trips to the region.


He recalled that on the two occasions that Nana Akufo-Addo had contested the presidential election, he had visited him at the Manhyia Palace to seek his blessing, adding that he would continue to pray for the President to succeed.

Otumfuo Osei Tutu said he had religiously followed the President's delivery and expressed the hope that by the time his mandate was over, he would have achieved what he had promised to do for the country.

Briefing Otumfuo Osei Tutu on his visit, President Akufo-Addo said he was in the region to inspect some of the projects being undertaken by his government.

He said his critics had accused him of sidelining the Ashanti Region in the development of the country and indicated that by the end of his tour of the region, those critics would be silenced because it would come to the fore that the government had undertaken massive development projects in the region.

Giving examples to buttress his assertion, the President said the Ashanti Region had benefitted from improved road development, with over 300km of asphalted overlay already undertaken, while 32 hospital projects were being undertaken.

On illegal mining, the President assured the Asantehene of the government’s resolve to bring an end to the menace, noting that as a result of the attention the government had devoted to the fight against the canker, the issue had become a topical one, with everyone talking about it.

He expressed delight at the way galamsey had become a topic for discussion.

From the Manhyia Palace, the President inspected work on the Boankra Integrated Logistics Terminal project, where he was assured that the $330-million project, popularly referred to as the Boankra Inland Port Project, which had been on the drawing board for about 18 years, would be completed by March 2024.

The concessionaire, Ashanti Ports Services Limited, a joint venture of Afum Quality Limited of Ghana and DSS Associates of the Republic of Korea, made this known.

The project covers a total land area of 413 acres.

President Akufo-Addo was informed by the concessionaire that it was working to deliver the project within the scheduled date, and that by the end of 2023, 80 per cent of the work would be done.

The concessionaire was hopeful that the eastern and the western railway lines would be completed on schedule to further improve the viability of the Boankra Inland Port.

The idea of the Boankra Integrated Logistics Terminal project has been in the pipeline since the days of the Kufuor-led government.

But that government encountered a number of challenges, with the exit of the NPP administration in 2009 worsening matters.

Cutting the sod for the construction of the port on November 5, 2020, President Akufo-Addo explained that the Boankra Inland Port project was initiated to provide services for importers and exporters in the middle and the northern parts of the country and also act as a major conduit for the efficient transportation of transit traffic to and from the landlocked countries of Burkina Faso, Mali and Niger.

After completion of the terminal, it will be fitted with an inland clearance depot, customs bonded and unbonded estates, commercial areas such as banks, offices and trading facilities, vehicle parking areas, light industrial areas and an administration complex.

The project will also offer significant employment opportunities for both skilled and unskilled labour during the two phases of construction and operation.

Beyond job creation, there are other ancillary small and medium-scale businesses that will be located within the enclave to support the operations of the terminal.

“It is noteworthy that the transformation of the Ghanaian economy from a raw material producing and exporting one to an industrialised one will be given a huge impetus with the coming onstream of this facility.

“Government’s commitment to establish firmly the economy of Ghana on a solid path of industrialisation, with the view to delivering a vision of self-reliance, development and prosperity for all, is unwavering,” he added.

The concessionaire, according to President Akufo-Addo, was committed to the realisation of that project.

Additionally, the concessionaire was expected to design, engineer, finance, procure, construct, operate and maintain the project and transfer title to the government after 30 years.

“It is my hope and expectation that the concessionaire will not renege on the confidence reposed in it and will take all the necessary actions to deliver the project on schedule and on budget,” he added.

The President expressed the hope that “this project and other similar infrastructure projects, such as the development of the Keta Port, the Tema-Akosombo Railway Line and the ongoing expansion projects at the Tema and the Takoradi ports, would make a positive contribution in ensuring that Ghana derives maximum benefits from the AfCFTA”.