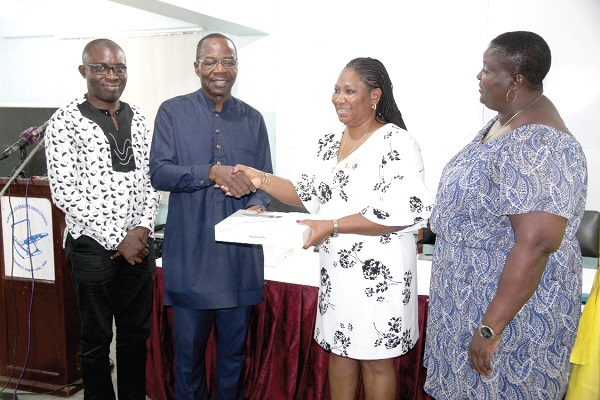 The Ghana Journalists Association (GJA) has presented a cheque for GH¢20,000 to the 2018 Journalist of the Year, Ms Doreen Hammond of the Graphic Communications Group Ltd.

The prize money was donated by the New Patriotic Party (NPP).

The GJA also presented another Apple MacBook laptop from the same donor to the Komla Dumor Most Promising Journalist of the Year 2018, Ms Ina-Thalia Quansah of Multimedia.

At a ceremony to present the prizes to the winners at the Ghana International Press Centre in Accra yesterday, the GJA President, Mr Affail Monney, commended the two journalists for their work and good conduct in the media space, stating that “the GJA Awards were not immune to controversies, especially with the Best Journalist Award, but we are happy to note that last year’s awards were free from such controversies because the winner was somebody who allowed her work to speak and the way she carried herself was exceptional”.

“This tells you that females have come very far; it used to be a male-dominated profession, but now the ladies are overtaking the men, not only in terms of numbers but also the quality of their output,” Mr Monney said.

He urged up-and-coming journalists who wanted to excel in their fields to emulate the good conduct of the winners, saying that doing so would enhance their output and make them easily recognisable.

Mr Monney said it was imperative for every journalist to scale up his or her effort to enable him or her win GJA awards.

“The GJA Awards are the pinnacle of all media awards in Ghana and the exposure alone, both national and international, will put you on top of the world and this is the prize every journalist should aim at.

“Once you win it, it catapults you into a different level; you will move from ordinariness to a realm of extraordinariness and you will rub shoulders with the best in the world,” he added.

Mr Monney expressed satisfaction with the standard of journalism being practised in the country, saying: “The quality is rated high, just as the country is also ranked high in the league of free media in Africa, feats that speak volumes about what the country has to showcase insofar as journalism is concerned.”

“As far as media freedom and media practice are concerned, Ghana has become the reference point and the standard measure.

If we have reached this far, then credit goes to actors such as Doreen and other journalists who have conducted themselves well in the profession,” he said.

In a brief remark, Mrs Hammond commended the sponsors for their support and also thanked the GJA for making it possible.

“When I won the Best Journalist of the Year award last year, I thought that was the end of the matter because I saw it as a monumental recognition which humbled me.

Little did I know that there were other surprises in the pipeline. I am very grateful to everyone who has made this possible,” she said.