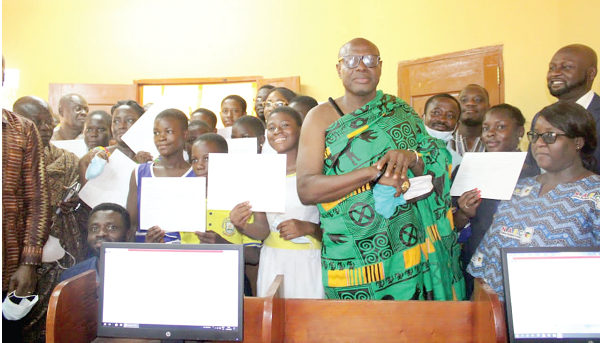 The beneficiaries displaying their certificates. With them are Nana Effah Openamang III (in traditional cloth), Chief of Obomeng, Prince Ofosu Sefah (in suit), Chief Executive Officer of GIFEC, and other officials. Follow @Graphicgh

Fifteen young females who successfully went through a two-week intensive Information and Communications Technology (ICT) training programme have passed out from the Obomeng ICT centre in the Kwahu South Municipality in the Eastern Region.

The group, made up of two basic school teachers, four entrepreneurs, six school girls and three school dropouts were drawn from Obomeng .

The programme, which is in its second phase, was organised by the Ghana Investment Fund for Electronic Communications (GIFEC) in partnership with the Norwegian Agency for Development (NORAD), the International Telecommunications Union (ITU) and the Cisco, an American multinational technology conglomerate corporation.

The beneficiaries were taken through subjects such as basic ICT, desk-top saving, creation of folders and posting their products on the internet.

The first phase, which involved the training of 43 persons in the same age group, has already been done.

The initiative is in line with the government's digitisation drive of the economy.

Addressing the beneficiaries after presenting them with their certificates, the Chief Executive Officer (CEO) of GIFEC, Prince Ofosu Sefah, said since the development of countries now depended on technology (ICT), it had become necessary to train the youth in that aspect to improve the lives of the citizenry.

According to him, advanced countries made significant improvement in their economies and Ghana could also achieve such a feat through ICT.

He indicated that GIFEC, an agency under the Ministry of Communications and Digitalisation, made key strides in that regard for infrastructural development.

Mr Safeh said through the rural connectivity programme, 2,016 rural sites were being connected to over 3.4 million citizens in underserved and unserved communities in Ghana and telecom network coverage was being increased to about 95 per cent of the people.
He explained that phase two of the initiative aimed at up to 99 per cent of the population was in offing to provide adequate Domestic Cloud Storage Services.

ICT development, the CEO stated, was not limited only to telephony connectivity but required the provision of facilities and equipment to support inclusiveness and skills enhancement.

Mr Safeh noted that GIFEC had over the years distributed computers and accessories to over 1,000 basic, junior and senior high schools across the country to facilitate teaching and learning.

He also indicated that GIFEC had engaged with the United Nations Education Scientific and Cultural Organisation (UNESCO) on ICT skills for entrepreneurial women empowerment, out of which 400 women and girls in the informal sector were trained in basic ICT and the application of tools to enhance their businesses and trade.

Mr Safeh also stated that his outfit and UNESCO had successfully trained 400 youth in the efficient use of ICT to counter violence extremism on the internet and cyber-bullying.

He advised the beneficiaries to make good use of the knowledge acquired to improve their businesses and consequently their living conditions.