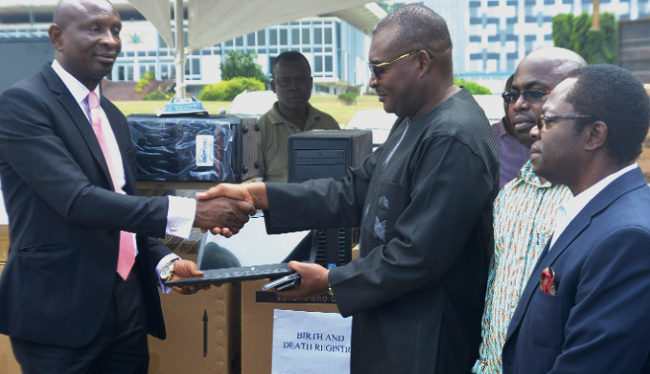 The Births and Deaths Registry’s quest to convert to largely automatic operations and have all its regional offices networked was given a boost last Tuesday when the Ghana Investment Fund for Electronic Communication (GIFEC) presented equipment, including 120 computers and accessories, to the Registry.

The GIFEC also presented 185 computers to 46 Community Information Centres (CICs) in eight regions as part of its mandate to help bridge the digital divide between rural and urban Ghana.

The registry also received 6 scanners, 10 printers and 10 air-conditioners while the CICs were presented with 25 printers, 16 scanners and 34 projectors at a total cost of GH¢1,174,098.

The Administrator of the GIFEC, Mr Kwabena Owusu Akyeampong, said the items would go a long way to support the Births and Deaths Registry and the CICs to effectively deliver on their mandate.

“We believe that once the organisations have received the equipment, we would see an increase in their levels of performance and functions,” he said.

The Acting Registrar of the Births and Deaths Registry, Mr John Yao Agbeko, noted that the equipment would help the registry move from paper to a digital process.

He said in 2009 the government and UNICEF provided similar facilities for the registry but they had since become obsolete.

“We are trying to have a wide area network through which we can get access to databases anywhere in the country. With the equipment given to us now, especially the servers, it would help much in that direction. That is why we are grateful to the donors for assisting us at this time,” Mr Agbeko indicated.

As information hubs, the CICs provide connectivity to metropolitan, municipal and district assemblies, private businesses and educational institutions, as well as individuals in the communities where they operate.

The centres are a combination of a profit tele-centre and non-profit community resource centre. The centres were set up with the objective of ensuring that people would get access to Information and Communications Technology (ICT) applications in order to accelerate growth and development.

Currently, more than 200 of such centres are dotted around the country.

While commending the GIFEC for the gesture, Mr Agbeko expressed concern over their office accommodation and said, “we are currently housed in pre-colonial wooden structures.”

Besides the fact that there is no back-up for stored data on the registry's only server, a fire outbreak can also wreak havoc on the files in stock.

The registry was established by the Registration of Births and Deaths Act, 1965 (Act301).