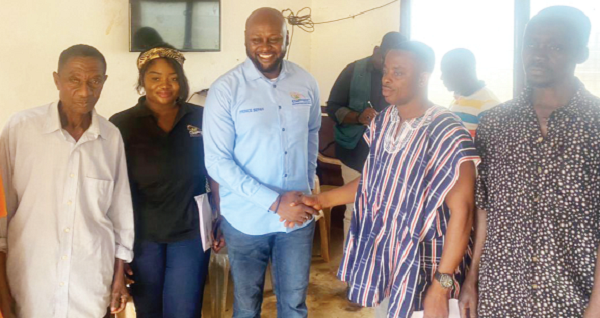 Prince Sefah (3rd from left), Chief Executive Officer of GIFEC, exchanging pleasantries with Nana Owusu Mireku, a traditonal representative of the Onyemso community. With them are staff of GIFEC and members of the community
30.5k Shares

The Ghana Investment Fund for Electronic Communications (GIFEC) has secured sites for the construction of 2,016 telecommunication sites in the country.

This forms part of the Ghana Rural Telephony and Digital Inclusion Project (GRT&DIP), an extension of the government’s flagship Rural Telephony Project (RTP), which seeks to provide an additional network coverage for 2,016 rural areas through the provision of voice and data access.

It is expected that at the end of the project, 3.4 million residents of such communities will be connected to help move the current 85 per cent network coverage in the country to 95 per cent.

As part of the implementation, the Chief Executive Officer (CEO) of GIFEC, Prince Sefah, last Friday led a delegation to some rural communities to complete the documentation process with the various local authorities in the communities that had handed over suitable land for the construction of the facilities.

The delegation from GIFEC and representatives of the traditional authorities signed documents covering the lands released for the projects after a drive test by staff of GIFEC to confirm the viability of the communities for the construction of the network sites.

The communities visited — Osubeng and Adunkwaa in the Kwahu South municipality and Onyemso in the Kwahu East District — are part of more than 2,000 rural areas to benefit from the project, which is being carried out in the Central, Western, Western North, Eastern, Ashanti, Volta, Oti, and Northern regions.

Mr Sefah explained that the network connectivity was a basic necessity of life, saying his outfit would leave no stone unturned in getting rural communities access to network.

He said acquisition was being made for 82 communities that passed technical simulation and approval from the mobile network operators.

He added that out of the 2,016 sites, the first stage of 1,010 sites were at various stages of completion in the target regions.

“There are many people here who are facing challenges and so when they get access through this project, they can do things that you and I may be taking for granted today and so it is very important that we include all these people,” Mr Sefah explained.

He expressed gratitude to the government for expanding GIFEC’s capabilities as an institution to undertake the projects and urged the public to support the government to do more by paying their taxes.

“You also become wealthy by the infrastructure and investment that the government makes in the people in society. It takes roads, telecommunications, all these things for us to build the wealth,” he stated.

The Municipal Chief Executive for Kwahu South, Emmanuel Attah Ofori, commended the government for the project.

Highlighting some challenges, he said most trainee teachers posted to some of the communities never showed up mainly because of the absence of electricity and mobile telephone network coverage.

Mr Ofori pleaded with the government to resolve the challenges in order to curb rural-urban migration.