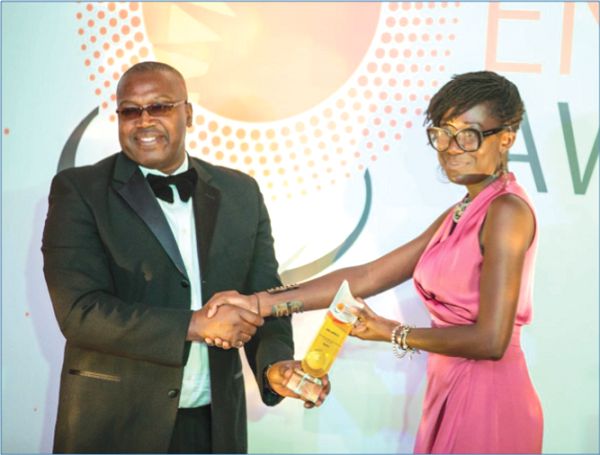 Efuwa Quansah (right), the Country Director of PEG Ghana, receiving the award during the event

PEG Ghana Ltd, a company that is into selling solar home systems on credit to low income earners in Ghana, has been awarded the ‘Best Off-Grid Energy Solution Company of the Year’ at the 2018 Ghana Energy Awards.

The award was in recognition of the PEG’s leadership role in the field of affordable energy and for operating in a sustained environmentally friendly manner.

The Country Director of PEG, Madam Efuwa Quansah, who received the award on behalf of the company, said: "We dedicate the award to the 250 young men and women working hard for PEG to provide affordable innovative energy solutions to underserved Ghanaians."

PEG has also pioneered an initiative called, The Gift of Light. Under the initiative, people resident abroad and those living in urban centres in Ghana have their purchases delivered and installed for their relatives and friends living in off-grid communities across all regions in the country.

PEG Ghana is a component of PEG Africa, which also has operations in Cote d’Ivoire and Senegal. The company has served clean renewable energy to nearly 300,000 individuals across Africa.

In addition to winning an award in Ghana, PEG Africa has won many other prestigious awards, including the International Ashden Award (UK) for Innovative Financing and was named by the London Stock Exchange as among the Fastest Growing Companies in Africa.

It was also referenced by the BBC as being in the group of Top 5 Technology Trend in Africa (2018).