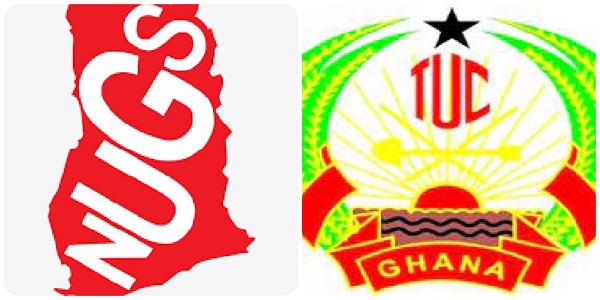 It is refreshing that the 2022 Budget and Economic Policy of the government proffers solutions to some of the current socio-economic challenges of the country.

However, there should be a rethink of some critical areas to reduce the hardships on the people.

This is the verdict the Trades Union Congress (TUC) and the National Union of Ghana Students (NUGS) passed on the budget.

At separate fora in Accra yesterday, the nobodies touched on areas,  including employment and taxes, which they said held the key to the forward march of the nation.

At a post-budget forum in Accra, the TUC said there was an urgent need to plug all the loopholes in the tax system to help raise the needed funds to support employment generation in the country.

In a presentation, the Secretary-General of the TUC, Dr Yaw Baah, said although the government had clone well in the last four to five years by giving financial clearance for recruitment into the security services, health and education, more could be done if revenue leakages were blocked to raise more revenue to create direct employment into the public sector.

The forum was organised by the TUC, in collaboration with the Friedrich Ebert Stiftung (FES),a German development agency.

Dr Baah said looking at the emerging threats posed by extremists in the sub-region and the recent crime rate in the country, the government should consider employing more people into the security services to enhance security in the country especially at the borders.

Touching on the Electronic Transactions Levy (E-levy), he said the TUC was yet to develop its position on it.

According to him, every good tax system should meet the five basic conditions, namely, fairness, adequacy, simplicity, transparency and administrative ease.

The TUC would look at the E-levy from that angle to make its position known to the government whether it should be reduced, maintained or scrapped, he said.

"You don't introduces tax that is going to increase the burden on poor people; he added.

While welcoming the abolition of the road tolling system, he said the TUC would also look at that policy and present its position on it to the government in the coming days, not losing sight of the needs of the people who lost their livelihoods.

On pensions, Dr Baah called for broad stakeholder consultations with the government to drive reforms in the sector to make the scheme more efficient and beneficial to workers.

He further called for a review of the public sector pay policy to reflect current trends, as low salaries affected the pension benefits of workers.

The Director of Research and Policy at the TUC, Dr Kwabena Nyarko Otoo, said the TUC made a number of proposals ahead of the presentation of the 2021 budget to the government, some of which were considered and factored into the final document.

Key among those that were not considered were the reduction in petroleum prices that had contributed to the rising cost of living in the country and the integration of all the various youth employment programmes into one to reduce cost and make them effective.

The Minister of Finance, Mr Ken Ofori Atta,who was present at the forum, gave a highlight of what the budget sought to achieve.
He reiterated his tall on Ghanaians to accept the tax measures in the 2022 budget as a sallying call to contribute their quota to nation building.

At a press conference to state its position on the budget, NUGS urged Parliament to approve the budget, since it had something good for the youth.

The president of NUGS, Mr Emmanuel Boaleye-Yiadom, who addressed journalists, said the budget adequately addressed the pressing challenges of students and youth in the country.

He indicated that the budget presented a great platform for the youth of the country to develop their potential.

He commended the Finance Minister for the E-levy proposal since it would rake in the needed revenue for national development.

He urged the government to hold more stakeholder engagements and public education to help address the fears associated with the tax. Mr Boakye-Yiadom expressed gratitude to the Finance Minister for the proposal to appropriate portions of revenue generated from the levy to support youth entrepreneurship through the YouStart initiative.

However, he said, NUGs would send an official petition to the Finance Ministry to exclude students from the payment of the E-Levy.

The Youstart initiative, he said, would support young entrepreneurs to gain access to capital, training, technical skills and mentorship to enable them to operate their own businesses.

"The decision to set up a university endowment as part of YouStart is spot-on and novel. We cannot wait for this to be rolled out and for students to benefit from this," Mr Boakye-Yiadom added.

Nevertheless, he requested a firm assurance from the government that funds generated from the levy would be used to support the youth, as promised.

"We would like to urge the government to judiciously allocate the resources, taking into consideration poor and needy youth who really need this push to develop their imaginative businesses into reality;" he said.

He added that the union would closely monitor the start and progress of the initiative.

He also expressed gratitude to banks and financial institutions in the country that had decided to invest GH¢10 billion in youth entrepreneurship through collateral free and low interest loans.

"This, for us, is one of the biggest interventions we have seen in the Fourth Republic to address an issue of ultimate importance to youth unemployment," he added.

Mr Boakye-Yiadom appealed to the government to look critically at the development of basic education in the country, as most basic schools had inadequate infrastructure and teaching and learning materials.

NUGS, he said, embarked on a campaign dubbed: "NUG Fix It Campaign; during which some building materials were donated to selected schools in the Ashanti and the Central regions to develop their infrastructure.