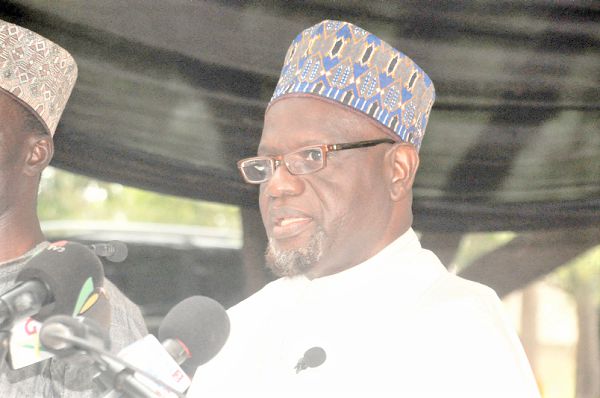 The 87th Annual National Convention of the Ahmadiyya Muslim Mission ended at Pomadze, near Winneba, at the weekend, with a call on Ahmadi Muslims to pray for an end to inter-ethnic and inter-communal violence in parts of the country that result in needless deaths.

The convention also urged the people to further pray that the road map to peace in Dagbon between the Andani and Abudu Royal families would proceed without any hitch for enduring peace to prevail in that part of the country.

The Ameer and Missionary In Charge of the Mission, Maulvi Alhaj Noor Mohammad Bin Salih, who made the call, mentioned the recent clashes between the Chokosi and Konkomba which had claimed four lives and described them as disturbing.

The convention, held on the theme: “Building a Violent-Free Society — The Role of the Citizen”, was attended by over 38,000 Ahmadi Muslims from all parts of Ghana.

The special guest of honour was the Vice-President, Alhaji Dr Mahamudu Bawumia.

Fraternal messages were presented by the National Chief Imam, Sheikh Osman Sharabutu, the Catholic Secretariat, Christian Council of Ghana and many others.

Maulvi Bin Salih reminded members of the message to the convention from the Spiritual Leader of the Ahmadiyya Muslim Community, His Holiness Hazrat Mirza Masroor Ahmad, that the community was striving to build the foundations of universal brotherhood.

The Ameer said under the Mission’s Education and Welfare Fund inaugurated last year, hundreds of deprived Ahmadi children had been retained in basic and secondary schools.

“Besides looking after the welfare of widows, and payment of medical bills of indigent members, youth with skills have been assisted to set up their own enterprises,” the Ameer stated.

Maulvi Bin Salih advised Ahmadi Muslims to live lives that were the embodiment of Islam and characterised by humility and righteousness as a condition to attract converts.

He appealed to members to dedicate their children to be trained as missionaries to provide moral and spiritual training to the growing number of Ahmadi Muslims.

In his message, Hazrat Masroor Ahmad cautioned Ahmadi Muslims against arrogance and conceit based on tribal affiliation or social position because they hindered the achievement of piety.

“What is essential is that you should enhance your standard of piety and righteousness because God’s blessings are derived from treading on this path”, he said.

His Holiness said Islam taught that people from whatever nation or tribe were creations of God and that the most honourable in the sight of God was the one who was righteous.

“The task of the Ahmadiyya Muslim Community is to spread the true message of Islam which is peace, brotherhood and harmony throughout the world, enlighten people about the beautiful teachings of Islam and thereby bring all mankind to the threshold of the Holy Prophet Muhammad,” he said.