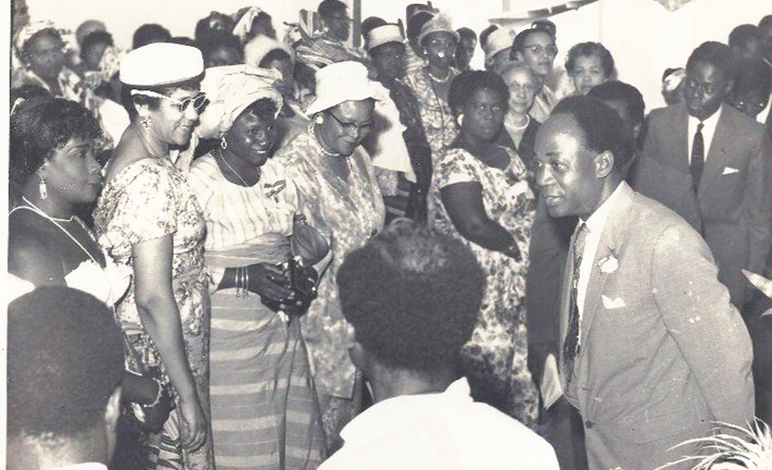 Ghana’s first President, Osagyefo Dr Kwame Nkrumah (right), interacting with Members of Parliament at one of the sittings at the first Session of Parliament in Ghana Follow @Graphicgh

Since Ghana’s independence in 1957, the country has been exploring measures to increase women’s participation in governance. This is in recognition of the fact that women’s contribution to labour, productivity and family sustenance cannot be overemphasised, and these justify women's participation in the country’s political process.

The United Nations Development Programme (UNDP) Human Development Report on Gender and Human Development maintains that women are a breed of impressively talented and remarkably intelligent people with a unique repertoire of experiences and knowledge, constituting both a source and signal of social change.

In 1954, the United Nations Convention on the Political Rights of Women went into force, enshrining women's equal rights to vote, hold office, and access public services as provided for male citizens within national laws.

According to tentative results of the 2010 Ghana population and demographic survey, women account for at least 51.2 per cent of the population.

Historically, Ghana has had varying degrees of successes in its efforts at effectively ensuring women's representation in national decision-making bodies.

For instance, he created 10 parliamentary seats for women in Ghana's first Parliament, increasing the number of women parliamentarians to 18 by 1965, five years after Ghana attained a republican status in 1960.

This became possible when he introduced the Representation of People’s Amendment Bill after he realised that the country’s Parliament was made up of only men.

The Women’s Manifesto for Ghana, a document that sets out critical issues of concern to women in Ghana, put together in 2004 by the Coalition of the Women’s Manifesto for Ghana and hosted by Abantu for Development, acknowledges that in spite of the pivotal role Ghanaian women play within the family, community and society at large, they occupy limited positions of key decision making in various sectors of the economic, political and social life.

This is because though Ghana has ratified major international instruments that call for affirmative action policies, created a specific Ministry for Women and Children, now Gender, Children and Social Protection, with explicit objectives to improve the socio-economic status of women and children; there still exists a disconnect between the existence of these concrete policies and the effective creation of avenues for women's participation, both in politics and public organisational life.

However, this reduced to 20 in the 230-member Fifth Parliament of the Fourth Republic after the 2008 election, with one of them passing away later.

Despite gender equality being enshrined in the 1992 Constitution and Ghana signing up to several international instruments such as the Convention on the Elimination of all Forms of Discrimination Against Women (CEDAW) and the Protocol to the African Charter on Human and Peoples’ Rights on the Rights of Women (AU Optional Protocol on Women), the number of women participating in local, district and national governance and decision-making structures is very low.

Ghana currently has an affirmative action directive to ensure that 50 per cent of government appointees (with 30 per cent to the district assembly) are women to try to encourage women's representation in public life at the local level.

An Affirmative Action Bill that seeks to increase the number of women in parliament, governance and decision-making positions and across the public sector and also to ensure that each public sector institution has a gender equality policy, has been approved by Cabinet. Its been gazetted and ready to be submitted to Parliament.

The obvious question being asked by most gender activists is to find out the obstacles to women’s participation in decision making.  Over the years there has been much debate on this issue but factors such as political illiteracy, lack of confidence, low capacities, negative stereotyping of women who engage in politics and complicated bureaucracies of political party structures all hamper women’s effective participation.

The United Nations has identified six avenues through which female participation in politics and government may be strengthened. These avenues are equalisation of educational opportunities, quotas for female participation in governing bodies, legislative reform to increase focus on issues concerning women and children, financing gender-responsive budgets to equally take into account the needs of men and women, increasing the presence of sex-disaggregated statistics in national research/data, and furthering the presence and agency of grass-roots women's empowerment movements.

The country made a laudable achievement for women and the country’s democracy when for the first time in the country’s history, Mrs Joyce Bamford Addo, a retired Supreme Court Judge, was appointed as Speaker of Parliament and sworn into office in 2009.

The irony, however, was that the former Speaker, during her tenure, presided over a Parliament with one of the least impressive records of women’s parliamentary representation at the time.

Mention can also be made of Her Ladyship Mrs Georgina Theodora Wood, Chief Justice of Ghana since 2007, who is making her mark in the Judicial Service of Ghana, not just as the first woman to occupy the position but also as a judicial reformer focused on improving access to justice and enhancing the public’s trust in the court system.

Appointed as the Attorney-General in 2013, Mrs Marietta Brew Appiah-Oppong is the second woman to hold this office in the country, the first being Mrs Betty Mould-Iddrisu.

Also, for the first time in the country’s history, women have also been appointed for other crucial positions.

Mention can be made of Mrs Elizabeth Mills-Robertson, a Barrister at Law with extensive experience in various fields of policing, appointed as the acting Inspector-General of Police, a position she occupied from January to May 2009; Ms Elizabeth Adjei, the first female Director of Ghana Immigration Service who was appointed in 2002; and Madam Matilda Baffour-Awuah, then the Acting Director General of Prisons, who came into office as the substantive Director-General of Prisons, promising to continue with the modernisation of the prison structures and the legal framework within which the Prisons Service operated.

The first female Minister of Foreign Affairs and Regional Integration, Madam Hannah Tetteh, who was also the Minister of Trade and Industry, was the National Democratic Congress (NDC) Member of Parliament (MP) for Awutu-Senya West.