Ghana to transition from fossil to renewable energy by 2070 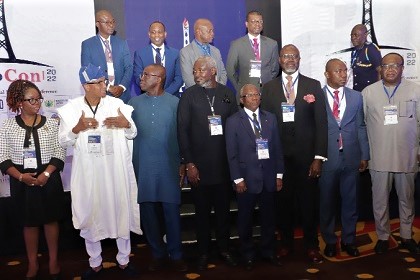 Mustapha Abdul-Hamid (2nd from left), Chief Executive Officer, National Petroleum Authority, interacting with William Owireku Aidoo (3rd from left), a Deputy Minister of Energy, during a photograph session after the opening ceremony of the Ghana International Petroleum Conference in Accra. With them are guests at the conference. Picture: SAMUEL TEI ADANO
30.5k Shares

The Vice-President, Dr Mahamudu Bawumia, has announced plans by the government to transition from the use of fossil fuel to renewable energy by 2070.

Towards that, he said, the National Energy Transition Committee had been established to draft a framework geared towards achieving net zero carbon emissions by 2050.

“So, even though as a government, we are fully committed to achieving net zero carbon emissions by 2070, we also have to take steps to accelerate the production and utilisation of our oil and gas reserves,” Dr Bawumia said, when he opened the 2022 Ghana International Petroleum Conference (GhIPCon) in Accra yesterday[September 28, 2022].

At the three-day conference on the theme “Energy Transition in the African Petroleum Downstream Context: Prospects, Challenges and the Way Forward”, the Vice-President said that meant that although the country wanted to contribute to reducing emissions, it held the view that a balance must be struck and maintained in the context of social, economic and environmental requirements.

Renewable energy, on the other hand, are sourced directly from the earth’s elements such as the sun, water (hydro), wind and degradable materials such as plants and animal droppings, usually known as biomass. They are known to be environmentally friendly because they do not emit carbons that can destroy both the environment and the sun’s covering, the ozone layer.

Vice-President Bawumia charged stakeholders in the energy sector to accelerate the production and utilisation of oil and gas reserves in the country.

“We ought to be forward thinking in a rapidly changing world, not only in terms of energy transition, but in terms of all aspects of the energy-mix,” he said.

He indicated that would enable the country to insulate its energy sector from global economic shocks, especially considering how the Russia-Ukraine war had affected the energy sector in the last few months.

“So, I expect this conference to become a sounding board for our governments in the West Africa region on how we can be full participants in the energy transition process, while remaining faithful to the needs and aspirations of our people,” Dr Bawumia said.

He expressed the hope that the petroleum downstream industry would continue to be the anchor for the transformation of the country.

The Vice-President also reiterated the government's commitment to reducing emissions from consumption of petroleum products.

“I am glad to mention that we were the first West African country to reduce sulphur content in transport and industrial fuels from a maximum of 5000 parts per million (ppm) of sulphur to a maximum of 50ppm,” he stated

The National Petroleum Authority organised the forum in collaboration with the African Refiners and Distributors Association and the Ghana Chamber of Bulk Oil Distributors.

It attracted major players, including chief executive officers, experts and decision makers in the petroleum sector across the West Africa sub-region.