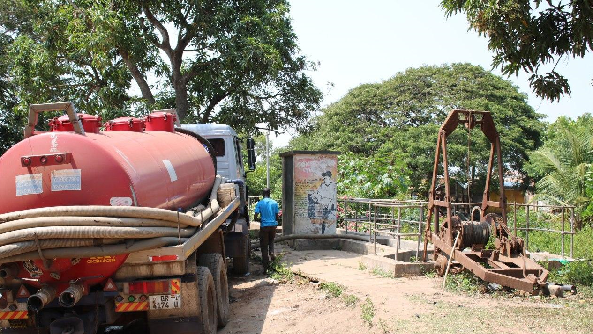 Tema, one of the well-planned cities, is facing serious sewerage management challenges due to increasing population and an obsolete sewerage system constructed when the industrial city was built by the country’s first President, Dr Kwame Nkrumah.

The overburdened infrastructure in the metropolis, most of which are either out of order or in dilapidated conditions, has lately seen very crude methods of discharging untreated faecal waste directly into streams within the Kpone community, as well as the beaches along the Sakumono, Tema Manhaean and Kpone communities.

From the traditional communities of Community One to Community 12 within the Tema township to the industrial zones, the port enclave, the Kpone Heavy Industrial areas, the various faecal processing units are unable to serve their purpose effectively due to damage to the facilities.

Workers at these facilities just receive the waste into the receptive tanks where the pumping mechanism carries it directly into the sea, a situation that has seen motorists that ply the Tema-Sakumono beach road endure a pungent smell at certain portions of the stretch on a daily basis for years now.

Faecal matter diverted from the Kpone Treatment site into the river near the Asogli Power plant. PIX DELLA RUSSEL OCLOO

Sewer flooding is a common phenomenon in the Tema metropolis due to damaged pipes, majority of which have never seen any form of rehabilitation since the 1960s, a situation that has been blamed for outbreaks of cholera, especially in the Tema Manhean and Kpone communities.

One of such leakage in July 2013, as a result of badly damaged underground sewer lines that pass through the market, saw a section of the market area being closed for more than a week.

During a tour of the facilities, the Daily Graphic noticed that the Kpone treatment unit, for example, was undergoing reconstruction under the Greater Accra Metropolitan Area (GAMA) Sanitation and Water Project.

As such, the faecal sludge had been redirected from the site with the help of pumps through an open space into a stream near the Asogli Power Plant at Kpone in the Kpone Katamanso District.

The diversion of the waste into the river has not only seen it changing colour completely but also emitting a foul smell that permeates the atmosphere within the industrial zone.

The treatment facility near the Tema Lube Oil area, also within the metropolis, which receives and treats faecal waste from the Community One area as well as industries within the area, is also out of order.

In view of this situation, faecal matter flows freely through the main gutter around Tex Styles Ghana Limited through the various storm drains that link it to the beaches at Tema Manhean (Newtown) and the Kpone beaches.

The treatment plant at Community Two, which also receives waste from the harbour enclave, is in no better condition. During a visit, it was noticed that the plant was rusty with half of the treatment chamber holding huge deposits of faecal matter which had dried up, while the other chamber had maggots- infested waste water that was overflowing to the ground.

Some squatters, however, oblivious of the health challenges, have turned the compound of the facility into an open defecation arena with very fresh and dried faecal waste visible at very vantage points when the Graphic team visited the facility.

The central treatment plant at Community Five, which receives nearly 75 per cent of the faecal waste from majority of the communities currently, only provides a receptacle for the waste which is then pumped to the chambers at Community Three, which is no longer functioning and has been overtaken by weeds.

A visitor to the Community Three site especially is greeted with a putrid smell in the area as the two huge wells which are to serve as the faecal sludge collection points where they will be processed into compost to provide environmental and agricultural benefits, as well as biomass production are not in good condition.

Surprisingly, squatters have turned some dilapidated office building structures at the Community Three facility into dwellings while others have put up wooden structures within the compound.

The wells, on the other hand, serve as a ‘free range’ place of convenience, as well as a dumping site for refuse which is heavily patronised by both the young and old.

Attempts to get responses from the Metropolitan Chief Executive for Tema, Mr Felix Anang-La, on the situation were unsuccessful as calls and text messages to him did not receive any response.

The Daily Graphic, however, understands that Sewerage Systems Ghana Limited, a subsidiary of the Jospong Group of Companies, has since launched a project to rehabilitate the facilities to process some 45,000 cubic metres of waste to generate some 234 kilowatts hour (kwh) of electricity and 475 kwh of thermal power.