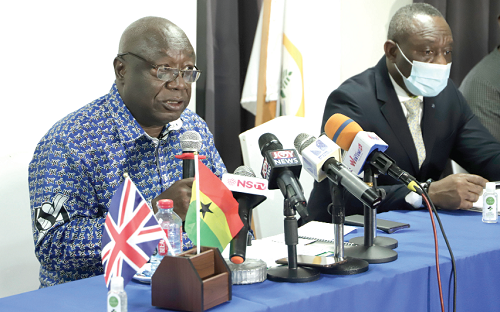 Ghana will need $9.3 to $15.5 bn in the next 10 years to implement measures to deal with climate change issues in the country.

In addition, the country will need $3.9 bn to implement 16 unconditional programmes of action to address the problem.

“Ghana requires between $9.3 and 15.5 bn of investment to implement the 47 Nationally Determined Contribution (NDC) measures from 2020-2030. In addition, $3.9 bn will be required to implement the 16 unconditional programmes of action till 2030.

“The remaining $5.4 bn for the 31 conditional programmes of action would be mobilised from the public, international and private sector sources and carbon market,” he said, adding that “Ghana will need additional $3 million biennially to support coordination actions and regulate international reporting of the NDC,” the minister indicated.

For nearly three decades, the UN has been bringing together almost every country on earth for global climate summits – called COPs – which stands for ‘Conference of the Parties’. Since then, climate change has gone from being a fringe issue to a global priority.

This year will be the 26th annual summit – giving it the name COP26. With the UK as its President, COP26 takes place in Glasgow.

He explained that implementing the 19 policy actions would generate absolute greenhouse gas emission reductions of 64 McEvoy (Metric tons of carbon dioxide equivalent), avoid at least 2,900 premature deaths per year from improved air quality, create over one million decent and green jobs, and be of benefit to the whole population with the majority being the youth and women.

Dr Afriyie said, among other things, that Ghana's delegation to the COP26 in Glasgow, Scotland would be led by President Nana Addo Dankwa Akufo-Addo. According to him, Ghana would set up a pavilion at the conference ground to showcase some of the steps it had taken to deal with climate change.

Ghana’s participation in the COP 26, the minister explained, would enable the country to contribute to global discussions on climate change, showcase national efforts at mitigating and adapting to the impact of climate change.

It will also provide a platform for bilateral discussions with development partner agencies for mobilising resources to address climate change.

He said climate change was currently threatening the world poor on a huge scale and that the most vulnerable would face water shortages if the problem was not addressed.

Additionally, he said the agricultural cycles would threaten food security across entire regions while rising sea levels would displace coastal communities in both rural and heavily urbanised environments.

The Executive Director of the Environmental Protection Agency (EPA), Dr Henry Kwabena Kokofu, expressed the agency’s willingness to continue to provide technical leadership on climate change in the country and avail itself to supporting the COP 26 preparation process and beyond.

Climate change, he said, was one of the defining development issues of all time and was another pandemic in waiting if the international community failed to act fast with ambitions.

The Charge d’ Affaires for the British High Commission, Ms Beth Cadman, said the UK government was expecting over 30,000 delegates to visit Glasgow, Scotland for the COP 26 event and that over 125 world leaders had confirmed their attendance.

She said the UK was playing its part to ensure that rich countries provided the finance that developing countries needed to adapt to climate change.

“Ghana is right to prioritise their needs at the COP; their voice is vital to spur action. It is a country with little responsibility for creating crisis but one in which the effects will be strongly felt.

“Securing access to climate finance will be one of Ghana’s key ambitions for the COP 26. The UK is working hard to reach the target of $100 bn a year, as well as reducing emissions,” She said.