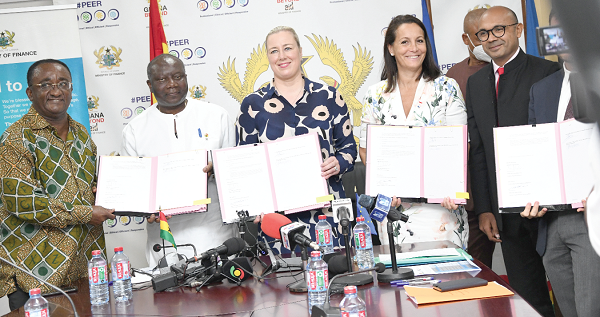 Ghana’s quest to build robust irrigation infrastructure in the northern part of the country has received a boost with the receipt of a grant of €44.7 million from the European Union (EU) and France to implement the Agricultural Water Management Project (AWMP).

The AWMP grant, comprising €39.7 million from the EU and €5 million from France, will be used to build and rehabilitate 35 irrigation schemes in the north-western part of the country.

Specifically, the grants will finance the rehabilitation and construction of 15 dams, 11 boreholes and nine pumping stations on the Black Volta and associated 1,300 hectares of irrigated perimeters.

The project will be managed by the Agence Francaise de Development (AFD), with the Ministry of Food and Agriculture (MoFA) and the Ghana Irrigation Development Authority (GIDA) as the implementing partners.

A ceremony was held in Accra yesterday, at which the government of Ghana, the EU and the AFD signed the agreement for the project.

At the event, the Minister of Finance, Ken Ofori-Atta, and the AFD Country Director, Christophe Cottet, exchanged signed documents on the project.

The agreement was also co-signed by the European Commissioner for International Partnerships, Jutta Urpilainen, and the French Ambassador to Ghana, Anne-Sophie Ave.

Present at the signing ceremony were the Minister of Food and Agriculture, Dr Owusu Afriyie Akoto, and the EU Ambassador, Irchad Razaaly.

By signing the AWMP document, the tripartite partners agreed to collaborate to develop the irrigation infrastructure in northern Ghana, where about 85 per cent of the population survive on agriculture.

The development of the irrigation infrastructure has been projected to provide a reliable source of income for more than 6,000 small-holder farmers who rely on unpredictable rain-fed agriculture.

Mr Ofori-Atta described the signing of the AWMP as an important milestone, as it would help revolutionise food production in northern Ghana.

He observed that given that the agricultural sector was a critical component of the economy, the intervention by the EU and the AFD in support of irrigation infrastructure would dovetail into sustainable development.

"We are truly delighted to sign the AWMP because it goes to the very heart of our people's livelihoods," he said.

The minister said the intervention aligned with the government's policy to support smallholder farmers.

For his part, Dr Akoto said the AWMP would help address the development gap in northern Ghana.

He noted that the project would contribute to the development of resilient and sustainable agricultural production in 11 districts in the Upper West Region, two in North-East and one in Savannah.

He noted that the AWMP was timely because it aligned with the government's one village, one dam (1V1D) policy meant to ensure all-year-round food production in the rural communities.

He urged all partners to remain committed to the project to ensure that it made the desired impact on the targeted beneficiaries.

Ms Urpilainen reiterated the EU’s commitment to support Ghana to improve on its agriculture, especially in rural communities.

She described the AWMP as "an ambitious and important investment which will boost the socio-economic development of regions in northern Ghana, essential for the development and stability of the country."

She observed that while the AWMP would facilitate the Planting for Food and Jobs policy of the government, it was more important because it would promote peace and security in northern Ghana.