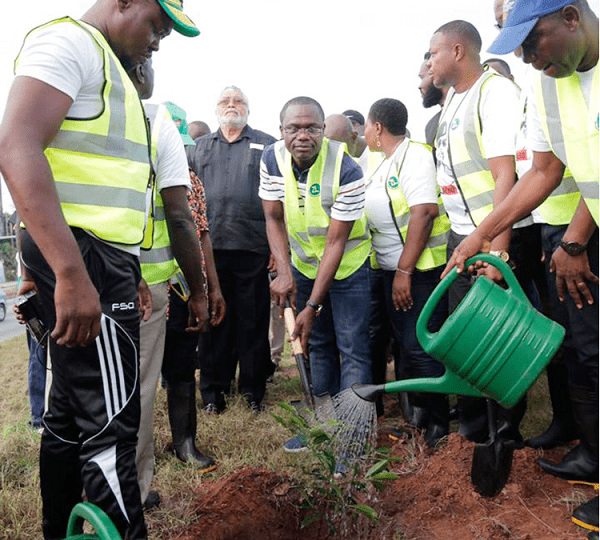 Flt. Lt. Rawlings with Mr Joseph Siaw Agyepong (with shovel) and others during the exercise in Accra

Zoomlion Ghana Limited and the Forestry Commission have partnered former President, Flt. Lt. Jerry John Rawlings to plant trees in parts of Accra as part of activities to commemorate the 40th anniversary of the June 4 uprising.

The exercise began last Saturday at the Tetteh Quarshie Interchange along the stretch to the University of Ghana (UG) Power Distribution Services (PDS) Park.

It is expected that after the exercise, more than 10,000 trees would have been planted.

This year’s celebration of the June 4 uprising is on the theme: “Developing a national character for sustainable good governance”.

The Executive Chairman of the Jospong Group of Companies and Zoomlion Ghana Ltd, Mr  Agyepong, thanked President Rawlings for inviting Zoomlion to join in the tree planting exercise.

He recounted how Zoomlion, since 2007, has been partnering with different stakeholders in tree planting and clean-up exercises. He appealed to the media to continue to sensitise the people against tree felling and littering among others to have an enhanced environment in Ghana.

Mr Agyepong asked every Ghanaian to be a watchdog to ensure that trees were not felled for construction purposes unless the necessary precautionary measures were taken with the state agencies.

He gave an assurance that his outfit would continue to plant as many trees as it could and support all others who would seek its collaboration in the environmental and sanitation space.

The former President bemoaned the spate of indiscriminate felling of trees without recourse to planting new ones, indicating that it would have dire consequences on the country's climate.

He said the lack of the enforcement of the law had paved the way for a lot of indiscipline in the country and called on the government, especially, the law enforcement agencies to ensure that environmental sanitation laws were enforced rigidly.

He also urged the media to use their platforms to educate the public on the need for them to protect the environment and plant more trees in order to live long.

For his part, Mr Ofosu Ampofo said the party was built on the tenets of discipline of which environmental care was one, and considering the fact that the environment was being degraded on a daily basis, it was appropriate for the party to encourage tree planting towards the June 4 anniversary.