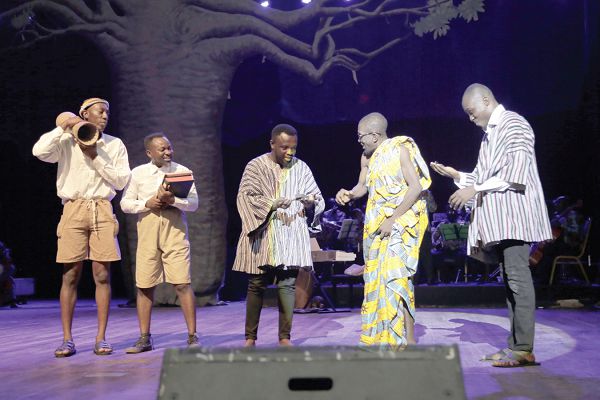 Members of the National Drama Company performing a play to portray the life of the late Prof. J. H. Kwabena Nketia at the National Theatre in Accra Follow @Graphicgh

Ghana will mark World Theatre Day tomorrow with the enactment of a sketch titled “Oman yi yε wo man” at the Independence Arch in Accra.

The sketch, being organised by Globe Productions, will bring together both old and new artistes to promote the arts and unify the nation.

The country’s very vibrant theatre arts of yesteryears is currently on life support, awaiting much needed resuscitation, practitioners in the arts have alluded to.

Although the theatre arts is one of the channels for social change and a vital tool for development and indeed in years past was a major tool in disseminating government’s policies to the citizenry, it is now underutilised and relegated to the background due to years of neglect.

The industry, has, however, been prevented from going completely dead by a few actors such as Fred Amugi, Jackie Ankrah, Edinam Atatsi, Adjetey Anang, the Roverman Productions, run by Ebo Whyte and Globe Productions headed by Latif Abubakar.

The National Theatre of Ghana and the School of Performing Arts of the University of Ghana, have also supported the practitioners to keep their passion alive and continue to shine the spotlight on theatre.

Some of the leading players in the industry including veteran actors Mr Amugi, Ms Ankrah, Ms Atatsi, as well as Kofi Boakye, Abubakar, and stage manager of Globe Productions, Solomon Fixon-Owoowho, who have called for a change in the narrative, interacted exclusively with the Daily Graphic.

Bright and bubbly Ms Ankrah did not mince words, calling for investment to develop infrastructure and also provide financial support for practitioners.

“A nation without the arts will be nothing really, all the heritage won for us. Who will depict our cultural heritage? What we need is support, all that money that goes into funding other activities I think some of it should be diverted into theatre development and we will see how bigger and better the nation will become,” Ms Ankrah suggested.

She explained that talents abound in the industry and that what was needed now was for the duty bearers and the private sector to see the need to focus on the development of theatres as a tool for national development.

On talents, the actress and radio personality, particularly, mentioned the septuagenarian and veteran actor Mr Amugi, who she described as one of the “genuine real talents” in the country that should be supported.

“We do have a lot of talents, there is Fred Amugi, Uncle Fred is 73 and he is still on his feet working hard because he has passion and desire to do what he does, he is good at it, but who will support him?” Ms Ankrah asked regrettably.

“I think it’s time to build up the arts, revive it and breathe some life into it. With this 10-minute sketch, this is what we are trying to say: that we’re ready, we are moving forward and nothing will stop us now,” the actress emphasised.

She stressed the importance of theatre arts, saying it could be used to create awareness of various issues, for all manner of campaigns to change behavioural patterns, for entertainment, relaxation, weddings, promotion of cultural values as well as for funerals.

“Imagine a nation without theatre, plays, storytelling and music. Who will tell us the messages we need as a people to create awareness, to pass on important messages of development, for various campaigns and for projecting whatever needs to be projected?” she said quizzically.

“All of our culture is based on theatre and without that drama I think we are nothing, so we need the theatre,” Ms Ankrah noted.

She equally observed that at a point in time the country “strayed” and rather focused on “the not so important things” to the neglect of the theatre industry.

Ms Ankrah expressed worry that some of the finest auditoriums and performance halls had been turned into commercial buildings and places of worship which was not a bad thing, though, but the message to drum home was “bring back the theatre arts!”

Mr Abubakar was of the view that theatre practitioners in the country were good enough to compete with their counterparts across the globe.

What the industry required, however, was financial resources.

“We will, therefore, tap the experiences of the veteran actors and actresses like the Fred Amugis, the Edinams and the Jackies to perform the 10-minute play,” he added.

He revealed that the play would bring together all the seasoned actors and actresses such as Adjetey Anang and Naa Ashorkor to stage an insightful play to stir up conversations on social media about theatre development in the country.

“Where there are conversations about a certain industry over and over again, the relevant stakeholders and duty bearers will begin to take action and that is what we need to do now,” the CEO of Globe Productions said.

For their part, Mr Amugi and Ms Atatsi expressed regret that almost all the arts centres across the country, including the ones in Accra, Ho, Koforidua and Kumasi appeared “dead", with some remaining uncompleted since the 1960s.

“We need proper theatre halls to do performances because apart from the National Theatre in Accra, we don't have major ones; we have arts centres but almost all of them are dead and uncompleted...it is so unfortunate," Ms Atatsi said with regret.

Mr Amugi recounted how he always had nostalgic feelings anytime he visited the National Theatre to watch performances.

The veteran actor pointed out that performing in the theatre taught actors and actresses a lot of things such as discipline, the art of public speaking and not turning their back to the audience while performing on stage.

Before the arrival of technology that popularise films, the performing arts, particularly theatre, was used as the main means of highlighting what was going on in society for education, information and entertainment.

Indeed, the music bands always made sure there was a concert or drama in their performances and that often attracted a huge patronage. 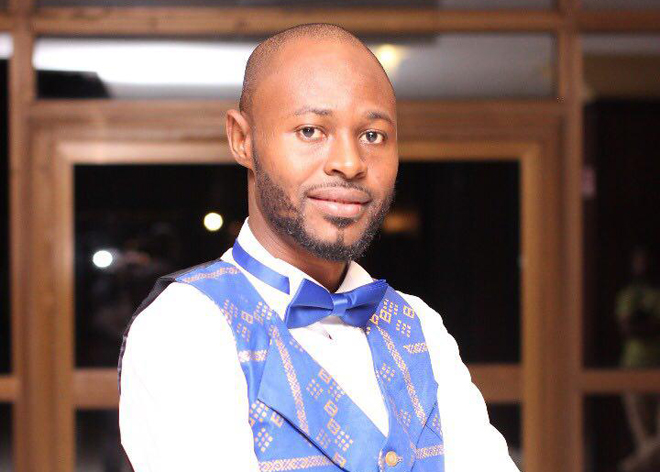 Although the Upper East Region has been described as one of the 16 regions with many unique aspects of cultural heritage that have not been adequately exposed and marketed, checks by the Daily Graphic revealed that the construction of the Upper East Regional Theatre that was started in the 1970s had stalled.

It was also observed that a wooden structure has been built on the foundation of the theatre which is being used by a church as a place of worship.

Commenting on the project, the Regional Director of the Centre for National Culture (CNC), Elizabeth Adongo, noted that portions of the abandoned project were being used as a place of worship to help ward off criminals that used the uncompleted project site to smoke and defecate around, resulting in poor sanitation.

Ms Adongo pointed out that the lack of theatre in the region was a setback to promoting the cultural heritage of the region as her outfit could not carry out most of the activities it intended to embark upon.

The Regional Director noted that the region was blessed with a lot of talents both in the movie and music sectors; however, there was no place for them to unearth their potential.

“Young people who are good writers, actors and singers find it difficult to progress because there is no place for them to start, no place to display their potential and be recognised,” Ms Adongo observed.

Towards changing the narrative, Globe Productions, riding on the back of World Theatre Day (WTD) which falls tomorrow, will stage a 10-minute play at the Black Star Square in Accra tomorrow to commemorate the day.

The play, titled “Oman yi yε wo man” to wit, “The nation belongs to you”, will feature a blend of old and new actors.

Since 2008, the National Theatre has been commemorating WTD, with the late Efo Kodjo Mawugbe, leading drama performances.

Each year, the organisation settles on places to go and what to do.

The go-to places include schools, where workshops are organised or drama performed.

WTD, initiated by the International Theatre Institute (ITI) in 1961, is an annual global celebration that allows players in the theatre industry to call to action the government, politicians as well as institutions and individuals to realise the potential of theatre to nation building.

The theme for this year's WTD is: “Theatre and a Culture of Peace”. The theme inspires us to consider theatre arts as a communication tool to promote peace.

The first live stage plays were performed in the Theatre of Dionysus in Acropolis, Athens, in Greece at the beginning of the 5th century.

Around that period, theatres proved to be so popular as they spread all over that country.

Theatre performances were used to thrill audiences, with unassailable entertainment, while educating the joyous spectators.

In Ghana, theatre as an artistic form has existed for centuries. However, the National Theatre Movement (NTM) was conceived around the time of Ghana's independence in 1957 to help remould the new nation's cultural identity.

It was to spearhead the theatre movement in Ghana by providing a multi-functional venue for concerts, dance, drama and musical performances; screenplays, exhibitions and special events.

“Things have changed, a lot happens in life and homes that we can capitalise on and produce plays. The story lines should be those that people can relate to,” he said.
Nii Tetteh stressed, however, that the cultural aspect of theatre could not be thrown away.

“The reason music, movies and others are making waves is because that is what the media carries. From radio to television, there is space for music to be played, movies to be aired and others, but not for theatre,” he stated.

Another thing that was affecting the industry, the PRO noted, was that patrons wanted to watch the plays for free or at a very low rate.

“As players, we need to work on branding the industry such that we can avoid these things. I pray that as we mark the day, stakeholders will also come in to help revive some of these places so that we can revive the industry,” the PRO of the National Theatre said.

In commemoration of WTD, Nii Tetteh revealed that for this year, some selected schools in Agona Swedru, Apam and Winneba would be taken through script writing for theatre production and other things.

Speaking to what the government was doing to revive the theatre arts industry, the Minister of Tourism, Arts and Culture, Dr Ibrahim Mohammed Awal, said the role of theatre in national development was acknowledged and appreciated. Therefore, the ministry would continue to engage stakeholders to promote the sector and make it attractive and competitive, he said.

“In line with this, a number of measures are being implemented. They include financial support, a platform to help build their capacity and the establishment of the Creative Arts School in Kumasi to help build talents for the industry,” he stated.

The minister admitted that the development of theatre in the country could not be discussed without acknowledging some of the great talents who had helped to sustain the art for decades.

Dr Awal recalled how theatre performances evolved over the years, culminating in the emergence of theatre groups some of which had survived till now.

He mentioned some of them as Kozi Kozi Theatre Company, Theatre Mirrors, The Royal Theatre Players and Chew Bones Theatre Group.

Others, he said, included the Adabraka Drama Group, Daakye Players and the Obra Theatre Company.