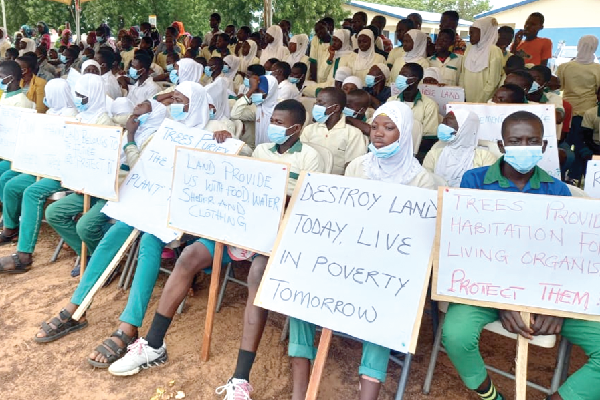 Ghana yesterday joined the rest of the world to commemorate this year’s World Day to Combat Desertification and Drought (WDCDD), with a resolve to enhance efforts to restore degraded lands and also raise more awareness of desertification.

The UN instituted the day, which is observed on June 17, every year, to promote public awareness of the causes and effects of land degradation, desertification and drought, as well as highlight efforts to combat those challenges.

The day, which was celebrated at Sambu in the Mion District in the Northern Region, was on the theme: “Land recovery: We will build back better with healthy land”.

It was attended by members of the Parliamentary Select Committee on Environment, Science, Technology and Innovation, chiefs, and civil society organisations (CSOs), among others.

The Minister of Environment, Science, Technology and Innovation, Dr Kwaku Afriyie, in a speech read on his behalf, said the sustenance of human life and health was dependent on plants and animals.

He, therefore, said combating desertification and drought in the country was a collective responsibility, hence the need for all to contribute their quota to safeguard the environment.

According to the minister, this year’s theme sought to challenge various entities to invest in land restoration to create jobs and provide livelihoods for the people, in the wake of the COVID-19 pandemic, which had led to some job losses.

Dr Afriyie added that the government had, over the years, initiated some interventions, including the Green Ghana project, all aimed at restoring depleted ecosystems.

In a speech read on his behalf, the Chief Executive Officer of the Environmental Protection Agency (EPA), Mr Henry Kwabena Kokofu, said aggressive land restoration and the sustainable management of biodiversity could help create jobs for the teeming youth.

“The loss of productive land is driving people, especially the youth, to make risky life choices; and in the rural areas where people depend on scarce productive land resources, the situation could be worse due to the impact of the COVID-19 pandemic,” he added.

He said as part of activities to mark the day, a tree planting exercise was being undertaken by the EPA to improve the vegetation cover of the country.

The Northern Regional Minister, Alhaji Shani Alhassan Shaibu, said the effects of desertification and climate change were evident in the area, with some water bodies drying up and the vegetation cover fast depleting.

He bemoaned the indiscriminate felling of trees and setting of bush fires in the region, saying: “We cannot fight desertification and drought when we continue to throw refuse and plastic away indiscriminately because plastic doesn’t decay but destroys the land.

“I, therefore, urge all to continue to clean and properly manage refuse, so that collectively we can fight the menace,” Alhaji Shaibu added.

In recognition of their sustained effort at protecting the environment, some individuals, including the Paramount Chief of the Mion Traditional Area, Mion Lana Abdulai III, and the Member of Parliament for Mion, Mr Abdul-Aziz Nyaba, were honoured.