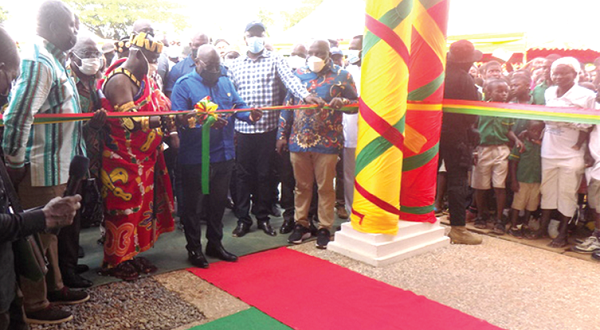 President Nana Addo Dankwa Akufo-Addo announced this when he inaugurated a modern three-storey office complex for the Asene-Manso-Akroso District in the Eastern Region.

He said all the new districts in the country were being provided with state-of-the art office accommodation to enhance the work of the staff.

In response to an appeal by the Akyem Mansohene, Obrempong Sintim Poku III, to help resolve the 22-year-old protracted chieftaincy dispute in Akyem Kotoku which had created factions among the people and hindered the development of the area, the President said he had already initiated pragmatic measures to deal with it.

According to the President, with the help the Senior Presidential Advisor, Mr Yaw Osafo-Maafo, who is a citizen of Akyem Kotoku, as well as the Chieftaincy and Eastern Regional ministers, the matter would be resolved to bring lasting peace to the traditional area.

The President stressed that as the Yendi and Ga Chieftaincy disputes had been amicably settled, his main concern was how to bring lasting peace to Akyem Kotoku and Akropong Akuapem which were facing protracted chieftaincy disputes.

In another response to Mansohene’s appeal for Technical and Vocational Training School (TVET) for Akyem Asene, President Akuffo-Addo promised to discuss it with the Education Minister, Dr Yaw Osei Adutwum, for consideration.

Obrempong Sintim Poku, who is also the Benkumhene of Akyem Kotoku Traditional Area, was full of praise for President Akufo-Addo for providing many development projects in the Eastern Region in particular and Ghana in general.

He gave the assurance that the chiefs in the Asene-Manso-Akroso District would offer him practical support to ensure the success of his reign.

Obrempong Sintim Poku III, however, appealed to the President to provide the local Atweaman Senior High School with a boys’ dormitory and a school bus.

Another office complex for Birim South

The President and his entourage later inaugurated a modern two storey office accommodation for the Birim South District Assembly at Akyem Swedru.

In a welcome address, the Akwamuhene of Akyem Bosome Traditional Area, Obrempong Ofosu Asante, appealed to the President to help improve communication network and the poor roads in the area and also provide a modern market for Akyem Swedru, the district capital.