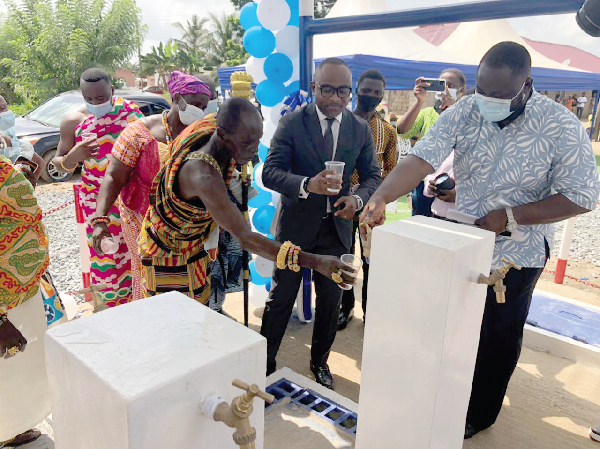 More than 3,500 people in two communities in the Ahanta West Municipality in the Western Region have been provided with solar powered mechanised boreholes to ease the perennial water challenges in the communities.

The Aboadi and Apowa communities did not have potable water and had to draw water from wells and other unclean sources even though they are close to the Sekondi-Takoradi city centre and the municipal capital of Ahanta West.

The existing draw-wells provided by the municipal assembly years back are unable to meet the needs of the growing population of the communities.

The new facility was financed by GOS Company Limited, a Schlumberger Joint Venture Company, which is one of the companies supporting the country’s upstream oil and gas industry.

The mechanised wells are fitted with a treatment system with an overhead storage tank, solar powered energy to pump water into the reservoir, a number of standpipes for easy access and clean ambiance to ensure hygiene at no cost to the communities.

At the handing over ceremony last Monday, the Managing Director of GOS Company Limited in charge of Nigeria and West Africa, Mr Sops Ideriah, pledged the company’s commitment to its host communities.

He said the company’s social investment programmes reflected its commitment to contribute to the wellbeing of its hosts, as well as their social and economic development.

He said the company was also committed to upholding international standards on sustainable development while respecting human rights in its operational area.

The Western Regional Minister, Mr Kwabena Okyere Darko-Mensah, said the government had made water and sanitation issues a great deal, and was committed to provide for it.

He said water and sanitation and related facilities featured prominently in the mandates of the three development authorities established by the government, adding, “we, therefore, see private initiatives such as this to be very complementary and always welcomed while we work towards 100 per cent coverage when it comes to water access”.

“I am happy it would serve the population of more than 1,800 people in each of the beneficiary communities,” he added.

The Chief Executive of the Ahanta West Municipal Assembly, Mr John Agyare, said the assembly would ensure that the facility was well managed to prolong its life span.

The Ahantahene and the President of Ahanta Traditional Council, Otumfuo Baidoo Bonsoe XV, said the two communities were growing fast and that water supply over the years had become a major challenge to residents.

“The provision of water systems for these emerging communities is timely to help reduce the water challenges and the attendant sanitation situation that comes with population growth,” he said.