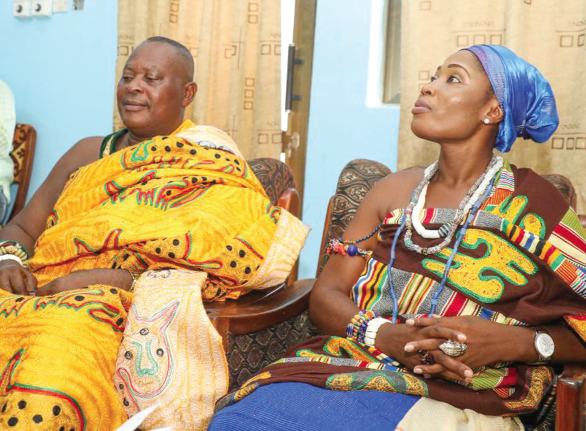 The Chief of Ada, Nene Abram Kabu Akuaku III, has lauded President Nana Addo Dankwa Akufo-Addo for ensuring the ratification of the mining leases to the Ada Songhor Salt Project.

The Mankralo of Ada, Nene Agudey Obichere, who addressed a press conference on behalf of the chief, noted that his people had been deprived of access to the river for both fishing and salt mining.

According to him, in 1985, the government cancelled the lease agreement and set up the Songhor Salt Project to continue with the salt mining but the project was deprived of resources.

Nene Akuaku explained that having made several attempts to speak to the relevant authorities over the lease agreement in the past, President Akufo-Addo worked on the processes and sent three mining lease agreements on the Ada Songhor Salt Project, through the Minerals Commission and the Ministry for Lands and Natural Resources, to Parliament for ratification.

“I am further delighted to say that Parliament, after going through its due process, has ratified these agreements in favour of Electrochen Ghana Limited (EGL) associated with our preferred investor,” he said.

He revealed that by the new development, the project and EGL had agreed to engage engineers to demarcate and set aside specific areas for local mining, in consultation with stakeholders.
Nene Akuaku said EGL was obliged to do large pans in the areas that would be identified, which, upon mining, would be sold back by his people at prevailing prices to EGL.

The chief of Ada also indicated that to meet its local content obligations, EGL was mandated to source its skilled and unskilled labour force first from Ada and give the Ada Traditional Authority a place on the board to oversee the smooth running of the project.

He urged residents in and outside Ada to have confidence in the project and ensure that it benefited the entire area.

The Production Coordinator for EGL, Mr Micheal Martey, said they were targeting production of salt from 130,000 tonnes to 200,000 tonnes within two years.

He pointed out that the community involvement in production would be high on the agenda in order to generate employment in the area.