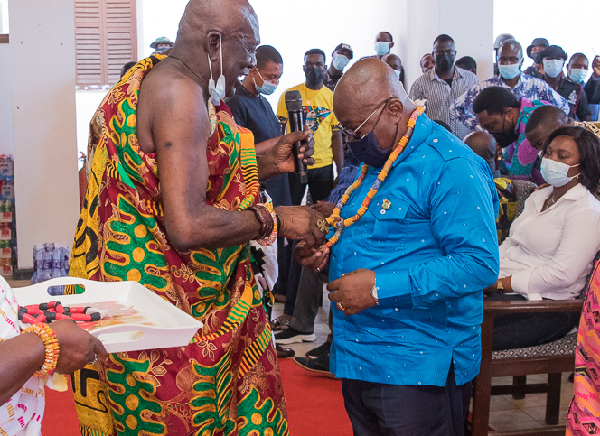 President Akufo-Addo in the studios of Eagle FM

He has, consequently, given an assurance that the sod will be cut for the commencement of the project by the end of March next year.

He, however, said the government was considering an airport that would conveniently serve both the Central and the Western regions.

In an interview on Eagle FM in Cape Coast yesterday as part of his two-day official visit to the Central Region, the President said the project would become a reality as promised.

The promise to construct an airport in the Central Regional capital was made during the launch of the New Patriotic Party’s (NPP’s) 2020 election manifesto in Cape Coast on August 22, 2020.

Outlining excerpts of the manifesto during the launch, the Vice-President, Dr Mahamudu Bawumia, said: “We will accelerate our investments in roads, railways and ports. And for the people of Cape Coast, I have good news for you — we are building a new harbour in Cape Coast and a new airport in Cape Coast.

“It is very critical that we do that. An airport makes a lot of sense in Cape Coast — it’s a real tourism hub. Among Greater Accra, Kumasi and Cape Coast, you have a triangle that is really a hub of economic activities. It is a major growth pole if we put an airport there to drive infrastructural growth,” he said.

Since the manifesto launch, some government officials have given assurances that the project will surely become a reality.

In May this year, the Minister of Transport, Mr Kwaku Ofori Asiamah, assured the people of the Central Region that President Akufo-Addo’s promise to build an airport in Cape Coast was not an empty one but something that would be done.

Addressing the Central Regional House of Chiefs, the minister said, “I am making a firm promise that by the end of the four years, the airport would be built.”

In yet another instance, the Minister of Parliamentary Affairs, Mr Osei Kyei-Mensah-Bonsu, delivering the 2021 budget in Parliament on March 12, 2021 in his capacity as caretaker Minister of Finance, said feasibility studies for the development of an airport in Cape Coast had commenced.

When the President was reminded of the NPP’s manifesto promise to construct a new harbour in Cape Coast, he pointed out that he never promised a new harbour for Cape Coast.

While in Cape Coast yesterday, President Akufo-Addo said inception works had been done for the airport and handed over to the ministry responsible, while feasibility studies were ongoing for the project to take off by the first quarter of next year.

"Consultants are being engaged and a feasibility report will be handed to the minister soon to determine the next line of action," he said.

On the Komenda Sugar Factory, he said feasibility studies were ongoing, and that the government was considering working to get the factory up and running by the first quarter of 2022.

President Akufo-Addo observed that while the project had become an albatross on the neck of the current government, considering its faulty planning and start, it would not allow such huge investment to go waste.

He indicated that the contract with the strategic investor who was expected to take over the project had been abrogated, while a committee of technical experts had taken over the feasibility to understand the essentials needed to kick-start the facility.

"It was like building a house and starting from the roof and not the foundation," he said, adding that the situation had created a lot of problems for the current government.

"The Trade Minister is diligently working to get technical partners for the factory and we are certain by the first quarter of 2022 the factory will start working again. We cannot sit back and watch it rot because a lot of investments have gone into it," he added.

President Akufo-Addo said the government he led had managed to improve the economy significantly, even in the face of the COVID-19 pandemic.

He said he was baffled by former President John Mahama’s criticisms of the current government when he (Mahama) had mismanaged the economy when he was President.

During a courtesy call on the Omanhen of the Oguaa Traditional Area, Osabarimba Kwesi Atta II, the Omanhen called for the allocation of some proceeds from tours to the castles to the metropolitan assembly and the traditional council.

He thanked the President for the implementation of the free senior high school policy which, he noted, had made young people more empowered and confident as Ghanaians.

The President said the Cape Coast Metropolitan Hospital would be considered for improvement, while the Ameen Sangari factory would be revamped under the One-district, One-factory programme.