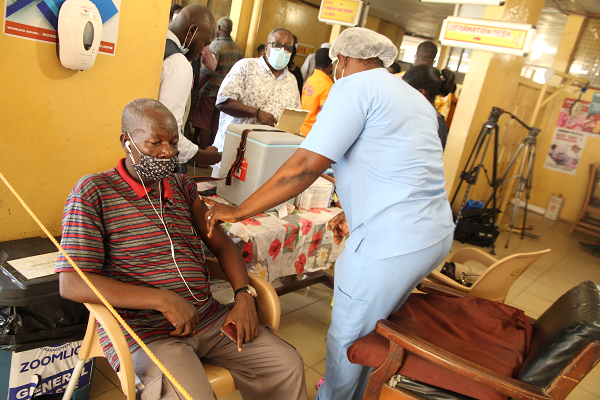 Some 13,682 people received the Oxford AstraZeneca jab on Wednesday, May 19, 2021, when the second round of the national COVID-19 vaccination took off.

The exercise was carried out by nurses and other health personnel at various vaccination centres in 43 districts in the Greater Accra, Ashanti and Central regions.

The Director-General of the Ghana Health Service (GHS), Dr Patrick Kuma-Aboagye, who disclosed this in an interview in Accra last night, expressed deep satisfaction with the high turnout.

Shedding light on the exercise, the Director-General said although there had been some few problems when the exercise began, which were anticipated, the entire process was quite successful.

“We had more people going to the various centres early in the morning than we had planned. That created congestion. We had hoped that they would spread patronage over the one-week period that we had given for them to go for their jabs,” he said.


He said another challenge that had confronted the exercise was that people had gone to centres that had not been designated for them.

“So receiving their data was initially difficult because the data team had gone to the centres with the names of people who were there,” he said.

To overcome the challenge of data retrieval, Dr Kuma-Aboagye said, an online application system had been restored to allow the data team to generate the data of jab recipients.

“Irrespective of where you have come from, as long as you are able to provide a reliable identification card (ID), such ID will be used to retrieve the data,” he said.

According to him, the online application system had come to stay, and that as the exercise expanded, more teams would be engaged to undertake the vaccination.

“We will continue to feed the population with information on when and where to go and we will also try to make sure that the vaccination appointment system is improved,” he said.

Meanwhile, Rosalind K Amoh & Felicia Kwarteng report that a delayed start and agitated people who created some chaotic scenes characterised the first day of the roll out of the second round of the vaccination exercise.

Although the exercise was to have started at 8:30 a.m. at all centres, it was not until half past nine, and at some places after 10 a.m., that it began, creating a lot of uneasiness among the people, some of whom had arrived at the centres as early as 4:30 a.m., with the hope of being among the first people to receive their second shots.

The second round exercise, which took off from yesterday, will have 360,000 people being vaccinated.

It is scheduled to take place in 43 districts — 25 in the Greater Accra Region, 16 in Ashanti and two in the Central Region.

During the Daily Graphic’s tour of some of the centres yesterday, it was observed that while the International Press Centre and also the premises of the Nursing and Midwifery Council, which served as the main centre for the Ayawaso West municipality, saw some orderliness and better coordination, there was poor coordination at the Legon Hospital, the Adabraka Polyclinic and the Greater Accra Regional Hospital (Ridge Hospital) vaccination centres.

At the Press centre, unlike in the first round which had only one nurse administering the vaccine, the second round had two nurses and they were on time, arriving by 8 a.m. to attend to recipients, mainly people in the media who also showed up early to get it done with.

However, the exercise had to delay, as there was a mix up with the data provided. It was realised that the data provided did not have the names of many of those who had taken the first jab.

It took a while for the error to be corrected, causing delay to the start. Once that was done, the exercise went on smoothly.

The management of the Adabraka Polyclinic had a tough time dealing with the number of people who turned up to receive their shots.

By 7 a.m., many people had arrived to receive the shots, but no one came to brief them on what had to be done. It was not until after 9 a.m. that information came that although many people qualified, some of them would have to go home and return on Friday to receive their shots.

The situation was not different at the Legon Hospital, where tempers rose among some of the people who had queued to be attended to.

The Registrar of the Nursing and Midwifery Council, Mr Felix Nyanta, who took the first jab, urged people who were eligible to take the second jab to do so without any hesitation.

A Senior Nurse at the Ayawaso Health Directorate, Mrs Sylvia Annaman, said for convenience sake, everyone should report at the centre where he or she took the first jab to receive the second, since his or her biodata had been captured in that centre’s systems.