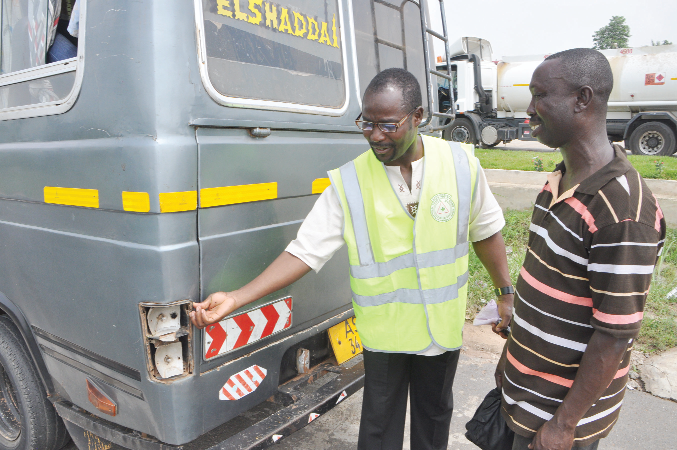 The influx of rickety and poorly maintained vehicles on roads across the country remains a major nightmare for commuters and a setback to road safety.

In spite of frantic efforts made by the Driver and Vehicle Licensing Authority (DVLA), the Motor Transport and Traffic Department (MTTD) of the Ghana Police Service and other stakeholders to stem the tide, the roads are still flooded with rickety vehicles which pose a danger to road users.

The capital city, Accra, is a haven for many ramshackle vehicles. Other major cities and towns such as Kumasi in the Ashanti Region, Tamale in the Northern Region and Cape Coast in the Central Region have not been spared either.

The Daily Graphic has observed over time that the physical condition of some commercial buses, popularly called "trotro," is poor because they are not well maintained.

For instance, some of the vehicles have corroded body frames, dilapidated seats with protruding sharp edges that passengers have to grapple with as well as worn-out tyres.

In some cases, the cracks through the frames of the vehicles cause them to leak profusely anytime it rains.

Again, some of the vehicles have exposed electrical wires and corroded surfaces that pose a danger to passengers.

In one instance, the Daily Graphic observed that some of the vehicles were so worn out that the conductors (driver's mates) had to tie the door with a rope along the journey to prevent it from falling off.

Some of the passengers the paper interacted with gave harrowing accounts about how the exposed wires and corroded surfaces of the vehicles injured them sometimes.

A passenger in a Kaneshie-Odorkor trotro in Accra, Kofi Adu, said on one occasion, a rope that was used to hold the seats in place came off, resulting in him falling off the vehicle and sustaining some bruises.

A petty trader, Maame Adwoa, also narrated how she got drenched in a trotro on her way to Olebu, near Ablekuma, because it leaked badly.

The cases of Waja Obed and Elija Kumah were not different as their rickety vehicles broke down midway through their journey, prolonging their journey.

"I took a trotro from Tema Station to Kasoa recently, and I regretted boarding the vehicle. The trotro was so old that the door had to be held together with ropes. Anytime a passenger wanted to alight, the driver's mate struggled to open the door.

“Imagine if something had happened and we had to move out quickly, it would have been difficult," Mr Kumah said.

When the Daily Graphic spoke to some of the drivers to find out how they got their vehicles on the road although they appeared rickety, one of the drivers revealed that he always got his roadworthy certificate through a third party.

"There are people who do it for us. We give the details of our vehicles to them and they go and do it for us," a driver, who gave his name as Dada Raph, said.

When asked why he did not take his vehicle to the vehicle testing centre to go through the process, he said it would waste time, and more importantly, he was not sure of getting the roadworthy certificate because his car was old.

Another driver, Numo Okine, who shuttles between Tema Station and Chorkor, in Accra, said he had a contact person at the DVLA who did his vehicle testing for him.

Asked if he was aware that the law required him to take the vehicle to a testing centre for testing and certification for the road, he said: "I have been driving this vehicle for 11 years now and I have not been to a testing centre. I call it don't mind the body. There is someone who does my roadworthy for me," he said.

He revealed that more than one million registered vehicles across the country had no roadworthy certification.

Mr Addison said 35 per cent of the 3,026,073 vehicles registered by the DVLA as of December, 2021, had failed to renew their roadworthy certificate.

This means 1,025,125 flagrantly violate Regulation Five of the Road Traffic Regulations, 2012 (L.I. 2180), which enjoins private vehicles to renew their roadworthy certificate every year, and for commercial vehicles, every six months.

Vehicles registered in the country include 985,355 motorcycles (two-wheeled cycles, quadricycles, tricycles); 1,575,723 light-duty vehicles, with buses and coaches (high occupancy buses with seats ranging between 15 and 55) accounting for 252,004.

The authority has registered 2,603 vehicles with particular identification, what is popularly referred to as customised numbers­," Mr Addison said.

He said the situation was more worrying because some of the vehicles operated with fake roadworthy certificate obtained through unorthodox means.

When asked what accounted for the non-compliance with the roadworthy certification, the DVLA’s vehicle testing deputy director said some of the vehicle owners were simply adamant and were not complying with the road traffic regulations.

Additionally, Mr Addison said some vehicles were off the road but their owners had not notified the DVLA for such vehicles to be “laid off” according to the law.

"The law provides that if your vehicle is parked at a shop beyond the statutory period that the law requires you to renew the roadworthy certificate, and you are unable to satisfy the requirement, you have to request a lay-off certificate from DVLA to indicate that your car will be off the road temporarily," he said.

Responding to a question about the modalities for testing the roadworthiness of vehicles, Mr Addison said the DVLA had licensed 31 vehicle testing centres in some parts of the country to facilitate the process of certification.

Mr Addison said the DVLA had strict monitoring systems at the testing centres to ensure that the process was robust enough to detect vehicles that were not roadworthy.

"We are moving from only physical inspection of vehicles to equipment-based testing. With equipment-based testing, we test for brakes, suspension, head lamps, alignment and other things, while visual testing focuses on undercarriage inspection, seat belts, tyre leakages, rusts, cracks and other things. We do all these to ensure that the result is objective," the deputy director of vehicle testing said.

Mr Addison explained that for the five regions in the north and other regions that had no vehicle testing centres, the DVLA relied on visual vehicle inspection to issue roadworthy certificates.

"We do not expect vehicle owners in those regions to move long distances to undertake vehicle testing, so we do visual inspection of them," he said.

Touching on measures being taken to deal with the rickety vehicles on the road, Mr Addison said the authority was deploying modern technology to address the challenge.

"When we see a rickety vehicle, we put it in our database and monitor it to ensure compliance. We have been able to capture some of the drivers who violated the law.

"Anytime we see the violations, we block your roadworthy certification and ensure that you comply.”

Mr Addison added that the authority was embarking on a sensitisation drive at transport terminals across the country to educate drivers and vehicle owners on the need to adhere to the law on vehicle testing and certification.

Again, he said, the DVLA had been undertaking enforcement exercises with the Motor Traffic and Transport Department (MTTD) of the Ghana Police Service and the National Road Safety Authority (NRSA) to arrest errant drivers.

The Greater Accra Regional Commander of Police MTTD, Deputy Commissioner of Police (DCOP) Martin Aryiih, said the rickety vehicle phenomenon was a hydra-headed challenge that needed a multi-faceted approach to deal with.

He stated that although the Police MTTD was always on the road to enforce traffic regulations, the department was sometimes handicapped when it came to rickety vehicles because of the weak system in the acquisition of roadworthy certificates.

"The DVLA has the sole mandate to determine the roadworthiness of vehicles and gives certification to that effect. As police, sometimes we see some vehicles on the road and we can see from their physical appearance that they are not fit to be on the road.

“ They have broken windscreens, damaged side mirrors, weak brakes, worn-out tyres and other features that show that they are not fit to be on the road, but such vehicles have roadworthy certificates, so it is difficult to impound them," DCOP Aryiih said.

He added that in some cases the police arrested the drivers of such vehicles and put them before court but the penalty regime was so insignificant that it failed to deter the drivers from using rickety vehicles.

The Regional Commander of Police MTTD said as the police enforced the law, it was also important for driver unions to have internal systems to prevent drivers of rickety vehicles from loading at their yards or stations.

"I know that they do not have the legal power to stop rickety vehicles from operating, but at the union level, they can impose restrictions on their members to ensure that any vehicle that is not fit does not load at their stations. In worst cases, they can even report errant drivers to the police for action to be taken against them," he said.

DCOP Aryiih supported calls for the GRTCC to be given legal backing to enforce standards among drivers.

However, he observed that even without legislation, the council could still play a pivotal role to curb the influx of rickety vehicles on the road.

The Daily Graphic also contacted a major stakeholder in the transport business, the Ghana National Road Transport Coordinating Council (GRTCC), on the issue.

The council said the influx of rickety commercial vehicles on the road was worrying and needed a holistic approach, involving all stakeholders, to tackle.

The General Secretary of the GRTCC, Emmanuel Ohene Yeboah, said it was important to take a critical look at the importation of second-hand and accident vehicles into the country.

"Some of those vehicles come in as wreckage cars, which are later sprayed and put on the roads for commercial use. Some are refabricated and the seats are altered from, say 15 to 23.

"So, let us imagine a situation where a vehicle that spent 10 years abroad is brought into the country and sprayed and put on the road; such a vehicle overloads and has poor brakes, you can imagine what will happen if there is a little obstruction," Mr Yeboah said.

He stressed the importance of strengthening the vehicle testing and enforcement regime to weed out rickety vehicles from the road.

On what the GRTCC could do to help stem the tide, Mr Yeboah said that although the council was well positioned to assist, it had no powers to do so.

He called on Parliament to pass a legislation to clothe the GRTCC with power to enforce standards to boot out rickety vehicles from the various lorry terminals.

"Those vehicles load from our terminals, so if we have the power to stop vehicles that are not roadworthy from loading, it will help in sanitising the system," he said.