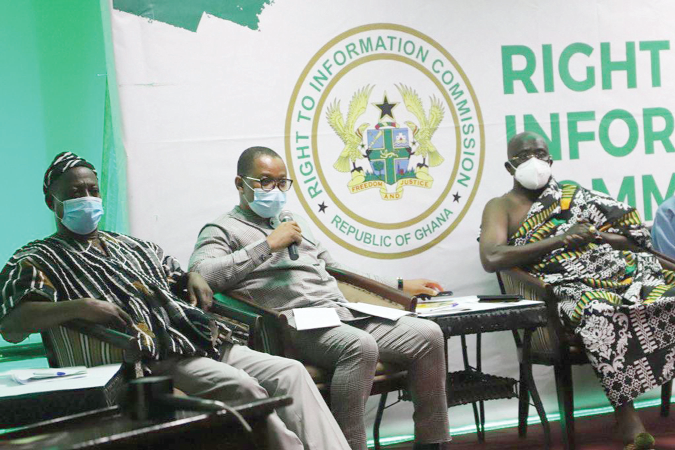 Mr Ben Abdallah Banda (with mic), a former MP for Ofinso South, speaking at the RTI Commission forum in Kumasi. Flanking him are Nana Kwame Adu (right), and Mr Justice K.A Ofori-Atta, both members of the commission. Picture: EMMANUEL BAAH

A former Member of Parliament (MP) for Offinso South, Mr Ben Abdallah Banda, has urged Ghanaians to test the Right to Information (RTI) Law by applying for information from state institutions to satisfy themselves that the law is working.

Mr Banda, a lawyer, said until Ghanaians tested the law, it would be difficult to know the challenges with it and correct them.

He said it was through such testing that one would know if the law was working to pave the way for it to be fine-tuned to address any bottlenecks and challenges.

Mr Banda, who is the Presidential Coordinator of the Zongo Development Fund, was speaking at a public forum organised by the Right to Information Commission (RTIC) to educate the public on the RTI Act, 2019 (Act 989) in Kumasi.

The former MP, who chaired the Parliamentary Committee on Constitutional, Legal and Parliamentary Affairs, the committee that worked on the act, said the law was one of the ways by which the citizenry could demand accountability from duty bearers by asking the right questions and requesting appropriate information.

Mr Banda said contrary to popular belief, the RTI Law was not for journalists alone but everyone, including foreigners.

The Chairman of the National Media Commission (NMC), Mr Yaw Boadu-Ayeboafoh, reiterated Mr Banda’s assertion that the law was not meant for journalists alone but all Ghanaians.

He said even students who failed examinations could request the marked scripts, while their parents could request the raw scores used by the Computerised Schools Selection and Placement System (CSSPS) to admit students to the senior high schools if they suspected mistakes.

Mr Boadu-Ayeboafoh indicated that the law would ensure that nothing was shrouded in secrecy any longer, saying it would also put public office holders on their toes to do the right thing.

However, he said, for the people to take advantage of the law, there was the need to increase public awareness and make it more accessible.

He suggested that the law be translated into local languages to enable those who could not read English to read and appreciate its content.

In his presentation, the Executive Secretary of the RTIC, Mr Yaw Sarpong Boateng, explained that with the coming into effect of the law, with the exception of information exempted by the law, no office holder could deny a requester the right to information.

He said to ensure that the heads of institutions did not interfere with the provision of information, the law required that every establishment had an information officer who would be in charge of providing the public information as and when the request was made.

Mr Boateng added that whenever an information officer refused to provide information, such refusal must be accompanied by reasons, saying the requester could seek redress from the RTIC, if dissatisfied.

Regarding fees, Mr Boateng explained that the fees charged by institutions for the provision of information should be based on the form of the reproduction of the information, such as written, email, on flash drive or CDs.

He said the fees were not at the discretion of the provider, and cited the example of the Minerals Commission which asked a requester media house to pay a huge sum of money as fees, which the RTIC described as “arbitrary”.

Mr Boateng urged all Ghanaians to make use of the law to seek information regarding management and use of public funds to promote accountability.

During a courtesy call on the Asantehene at the Manhyia Palace in Kumasi last Wednesday, the Executive Secretary of the RTIC entreated Ghanaians to be interested in the work of the commission and patronise its services to ensure that the law achieved its objectives.

Mr Boateng, while interacting with the media after the meeting, said the citizen “has a duty to take interest in getting information. This is what the law is about. Let it not be that we pushed for this law and we have all gone silent about its usage”.

“Let’s be interested in using it to get what we want, and for accountability and transparency in the administration of the country as a whole,” he said.

He admitted that the public barely knew about the work of the commission and said it had started carrying out vigorous public engagements to educate the public on its work.

The visit to Manhyia was, therefore, to seek the blessing of the Asantehene, Otumfuo Osei Tutu II, as part of the public engagements and also introduce the members of the commission to him.

Since its establishment about a year ago, Mr Boateng said, the RTIC had received about 20 complaints and determined a number of them, with some still pending.

Aside from that, he said, the commission had been engaging the public online, saying: “So far I think the commission is at work. We have been in office for barely a year but we have moved very fast to ensure that we have an effective operation.”

Some of the members of the Governing Board of the commission who were in Kumasi were its Chairman, Justice K. Ofori-Atta, Messrs David Oppong Kusi, Nana Kwame Duah and Mrs Elizabeth Hayfron-Asare.