Rawlings’s death must unite us — Duncan-Williams The General Overseer of Action Chapel International, Archbishop Nicholas Duncan-Williams, has expressed the hope that the passing of former President Jerry John Rawlings will unite, rather than divide, the nation.

He said although the nation had been left broken and shattered over the former President’s death, he hoped that it would eventually unite the country.

"I pray that his passing will unite us as a nation and not divide us deeply. This is because we are already divided; we are already shattered and we are already broken. In this brokenness and pain that we are going through, I admonish you to be strong,” he added.

Archbishop Duncan-Williams expressed the wish when he visited the residence of the former President in Accra yesterday to commiserate with the bereaved family.

Present were the former First Lady, Nana Konadu Agyeman Rawlings, her children and other family members.

Former President Rawlings died at the Korle-Bu Teaching Hospital, after a short illness, on November 12, 2020, aged 73.

Archbishop Duncan-Williams encouraged the family to be strong, in spite of the difficult situation they were going through.

“I just want to assure you that we are with you and that you can count on us in these difficult and trying times. Whatever role we can play, we are part of this family and so you are not alone,” he said.

He urged the widow to be the mother she had always been, adding: “As a mom, let this time bring us together and heal us as a nation and as a people because we are all hurt."

He prayed for God’s blessings and protection for the family. 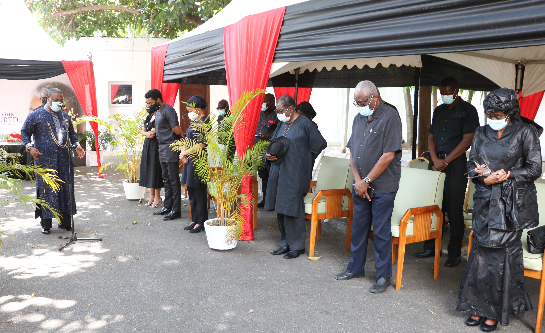 A member of the family, Mr. Victor Gbeho, thanked the Archbishop for finding time to mourn with the Rawlings and Agbotui families.
“The giant baobab tree in front of our house has come down and we are exposed to the vagaries of the weather,” he said.

Mr. Gbeho explained that about two weeks ago, Mr. Rawlings fell ill and was hospitalised, adding that when all thought he was making good progress, about 10.10 a.m. on November 12, news came to the family that he was no more.

“We will find it difficult to forget a man like him. We know that people are also mourning with the family because we have lost this giant of a leader,” he said.

Other personalities who visited the bereaved family were Mr. Ashie Morton; a former Director of the Castle Information Bureau, Ms. Valerie Ann Sackey, and her deputy, Nana Opoku Acheampong; friends of the Rawlings Family, Professor Kweku Bentil and his wife; the Council of Elders of the National Democratic Congress and a delegation from the University for Development Studies.

The visitors signed the book of condolence opened at the residence in memory of the late former President.