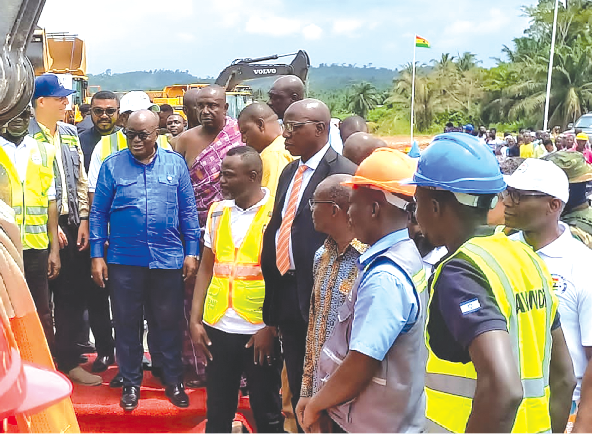 President Akufo-Addo with engineers at the construction site Follow @Graphicgh

The President, Nana Addo Dankwa Akufo-Addo, has cut the sod for the construction of the Manso to Huni Valley stretch of the Western Railway.

Expected to be completed in 42 months, the almost 78-kilometre railway will be one of the major haulage lines in the country that will help revamp the operations of the Ghana Railways Company Limited.

It will change the infrastructure from a narrow gauge to a standard gauge, which is the new standard for rail lines in the country.

The project will be executed by Amandi Investment Limited at the cost of €500 million, with funding from the Deutsche Bank Credit Facility.

At the sodcutting ceremony at Manso in the Amenfi Central District in the Western Region yesterday, President Akufo-Addo warned saboteurs who had resolved to steal the lines for scrap.

He gave the assurance of the availability of the funds required for the project, saying: “Let me reiterate also the government's determination to provide the enabling environment for the development and growth of the rail transport sector to the internationally acceptable standards.”

The President said aside from the activities of illegal miners having a negative impact on the railway right of way within the Tarkwa Municipality, which had led to the modification of the design and high construction cost, “some unpatriotic people have resorted to stealing the vital components of the steel, including the rail tracks.”

President Akufo-Addo warned that such developments were not just worrying but stalling development efforts.

“I want to sound a strong word of warning that individuals perpetrating these criminal acts when caught, the law will take its course and the appropriate sanctions would be applied,” the President warned.

He said owing to the importance of the railways sector, the time had come for everyone to lend support to the development of the rail sector to return it to its profitable and vibrant days.

The President said over the last five years, the government had laid a solid foundation for the sector by committing to the development of the sector.

He recalled that between 2012 and 2017, the only addition to the lines was a kilometer narrow gauge from Sekondi-Takoradi and Kojokrom.

“Let me say upon resumption of office in 2017, I was determined to change the statistics – because the presence of efficient railways system is important to the progress and prosperity of our nation,” the President said.

That, he sad, had led to the re-establishment of the Ministry of Railways Development which was fast yielding results.

Key among the rail projects currently ongoing was the development of a new standard gauge railway line between Tema and Mpakadan in the Asuogyaman District in the Eastern Region, the President said.

President Akufo-Addo noted that the development of the Western Railway Line was on course, with the 22-km section of the line from Kojokrom to Manso scheduled for completion before the end of the year.

For his part, the Minister of Railways, John Peter Amewu, said rail transportation provided the most appropriate means of haulage of heavy goods such as minerals, bauxite and petroleum products.

“With the vastness of the commodities, others in line for transportation along the corridor include cement, cocoa, timber, which also have the haulage potential on their respective projected volumes,” he said.

The Western Regional Minister, Kwabena Okyere Darko Mensah, reminded the people of the government’s commitment to the development of the country.

He cited some ongoing projects and indicated that the government would not let the region down.

The western rail line which starts from Sekondi-Takoradi to Kumasi was constructed in 1903 and is the major route for the transportation of minerals and other bulk commodities such as cocoa, bauxite, manganese, cement, flour and petroleum products.