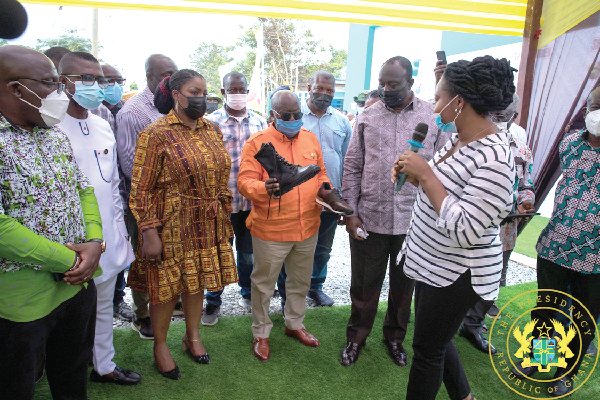 President Akufo-Addo admiring some products of the shoe factory

President Nana Addo Dankwa Akufo-Addo has commissioned two factories in the Eastern Region as part of his tour of the region.

The factories, which form part of the government’s One District One Factory (1D1F) initiative, are a garment factory at Effiduase in the New Juaben North municipality and a shoe factory in the Akuapem North District.

The President explained that the 1D1F initiative was to help address youth unemployment for wealth creation by attracting the private sector into the communities.

The garment factory, which commenced operations in 2013, provides direct employment opportunities for more than 100 young people in the area.

The factory, which received support from the Ministry of Trade and Industry and the Ghana EXIM Bank, was able to export 20,000 and 80,000 units per month in 2019 and 2020, respectively.

According to the Founder of the MaaGrace Garment Factory, Mrs Comfort Owusu Agyemang, the company had the capacity to manufacture utility clothing such as uniforms for the security agencies, hospitals and schools.

The GH¢6.2-million Fabriek Shoe Factory is also capable of producing 800 pairs of high-quality shoes, including security boots, school shoes and casual wear for men, women and children, per day.

According to the managers of the factory, Messrs Michael Asare Bediako, Opoku Benson and Salomey Gyamfi, the siting of the factory in Akuapem North was to create jobs to reduce rural-urban migration.

So far, the company has created jobs for 144 people in its catchment area, a classic example of the government’s import substitution programme being implemented by the Ministry of Trade and Industry under the 1D1F programme.

President Akufo-Addo commended the management of both factories for supporting the industrialisation transformation agenda of the government.

He also expressed appreciation to the textile industry for supporting the government with personal protective equipment (PPE) for frontline health workers and other professionals to help contain the spread of the COVID-19 pandemic in the country.