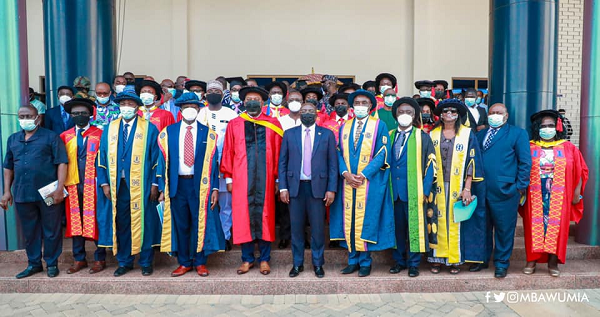 Vice-President Mahamudu Bawumia (arrowed) with members of Congregation of the University of Professional Studies, Accra

The Vice-President, Dr Mahamudu Bawumia, has charged fresh graduates to brace themselves to confront imminent challenges they will encounter in the world of work.

That was because they were coming into a fast-changing world, one that was also dealing with a herculean COVID-19 pandemic, he said.

Dr Bawumia, who was speaking at the 13th Congregation of the University of Professional Studies, Accra (UPSA) last Saturday, said “as you enter the public sector, you will be challenged with obstacles but you have to fight them and win that battle.”

The 13th Congregation facilitated the graduation of 870 students from various faculties, including 106 Law students.

It also marked the conferment of an honorary doctorate degree on the Minister of Energy, Dr Mathew Opoku Prempeh, who is also the Member of Parliament for Manhyia South, for his exemplary leadership and dedicated service.

The Vice-President took the opportunity to highlight some of the challenges in the public sector and mentioned bureaucracies which characterised basic public services, such as obtaining passports, driving licences, clearing of goods at the ports, ghost names on government payroll, narrow tax base of the population and the multiple sales of land.

He added that the focus of the government was to attack those challenges and find solutions to them.

To that end, Dr Bawumia said when the government assumed the reins of power it set itself to build a system that was based on data and not on “who you know” or the discretion of individuals.

“We need to build a system that promotes transparency and accountability. A system that eliminates corruption in the provision of government services and a system that works for the poor, the vulnerable and excluded in society,”Dr Bawumia emphasised.

The Vice-President added that pursuing a strategy to digitise the economy was one of the best ways to properly position the country in the global economy.

He said that had been the focus of the government over the last four years as the world entered the fourth industrial revolution.

Dr Bawumia commended UPSA for its immense contribution to education in the country and said for more than 55 years, the university had lived up to its responsibilities of training and educating professionals.

Vice-President Bawumia also described the honorary doctorate awarded to Dr Opoku Prempeh as a well-deserved honour which reinforced the high regard many had for the minister and his remarkable leadership in the promotion of free education.

The Vice-Chancellor of the UPSA, Professor Abednego Feehi Amartey, urged the graduates to be mindful of the rapidly changing times and accordingly adapt to be successful.

Prof. Amartey also urged them to understand the difference between school and life after school and asked them to learn from lessons of life since they had been prepared adequately for opportunities.

The UPSA Vice-Chancellor further advised the graduates to work hard and excel wherever they found themselves, as they had been released into the uncertain and changing world to search for opportunities.

“Be agents of change wherever you go by displaying high levels of integrity, discipline, professionalism, and above all, godliness in all spheres of your endeavour. Keep the same head in adversity and a fair judgement in your dealings with others,” Prof. Amartey noted, and urged them to eschew cutting all forms of corners.

For his part, the Minister of Energy expressed appreciation to the governing council of UPSA and said he would forever cherish the honour.

He said he would like to be remembered for the values he exhibited in public service.

Dr Opoku Prempeh paid tribute to his team at the Ministry of Education and his constituency executive for their immense support over the years, saying “the collective security of the society is with the people we choose to lead us to make decisions for us to protect us and to ensure our wellbeing.”

The Energy Minister stressed the need to nurture the right leaders for the country to ensure that the right calibre of people became leaders in future.