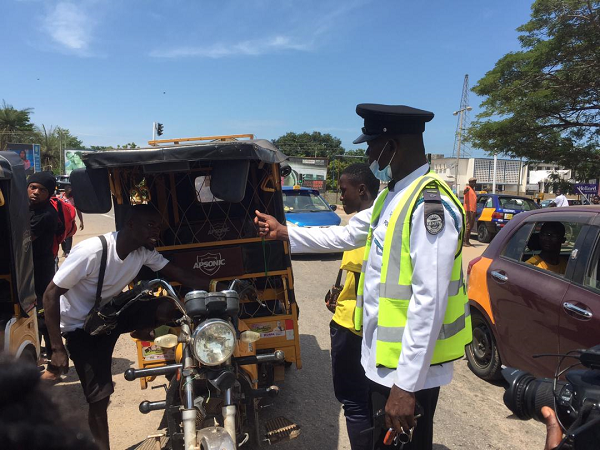 The city of Cape Coast is a beautiful place with many unique traits and its place in tourism is undoubtedly unrivalled.

Of the many things linked to the city's uniqueness is the absence of mini buses, popularly called trotro, for transportation across the city.

This could be said to be basically because Cape Coast is relatively smaller compared to the major cities of this country.

For decades the city only knew taxis as its major mode of transportation. Apart from Cape Coast-Nkanfoa, there are virtually no trotro stations in Cape Coast. You either walked to where you wanted to go or you took a taxi cab. There was no middle way.

However, in recent times tricycles have created a rather cheaper option to the taxis.

Popularly known as "Pragya" the tricycles have become a major part of the transportation fabric of the Cape Coast Metropolis as a result of rising urbanisation and possibly the absence of a reliable public transport system.

There are hundreds of these tricycles battling it out with the traditional taxis on the streets of the region’s capital, thanks to what most users describe as cheap fares.

The slight difference in fares is, however, a big motivation for its users.

Speaking to the Daily Graphic, a regular user of the Pragya, Ms Erica Gyeduwaa Simpson, indicated that tricycles plying the roads charged them just GH₡1 for town trips, while taxi drivers charge between GH₡1.50 and GH₡3, and that to them was a way of cutting down cost on transportation.

“Sometimes they even take you to your doorstep, something the taxi drivers will never do,” she said.

With the tricycle having a passenger compartment with metal frames with no airbag and other safety features that could reduce the severity of an accident, one would think that commuters would put their safety first before patronising them but that is not the case.

Some commuters explained that although the taxis offered them a safer journey, they still preferred the tricycles to the taxis, citing the cheap fares as the major reason.

“When you are in the pragya, your body is still dangerously exposed and in the event of even a minor crash chances of sustaining injuries are higher,” Ms Hawa Yussif said.

“But the good thing is, we don’t use them for long journeys and that makes it safe because most of these accidents occur during long journeys,” she opined.

She, however, recommended that the riders should be taken through courses on safety and operation. 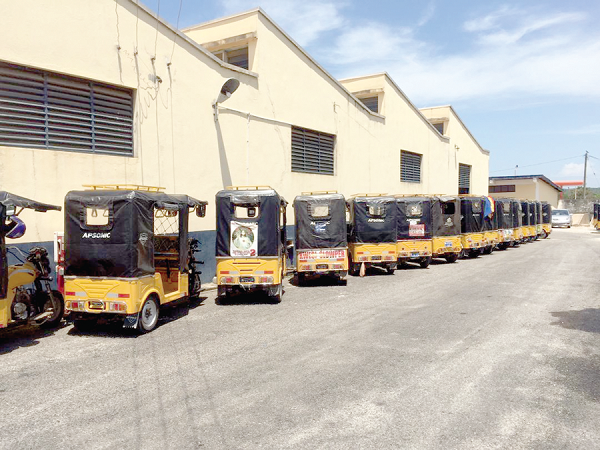 The Central Regional Police Commander, DCOP Mrs Habiba Twumasi-Sarpong, who recently spoke on the development said her outfit was putting in place measures to ensure that the activities of the pragya operators were effectively regulated in line with propositions from all major stakeholders.

She pointed out that regulating motorcycles and pragya was not just a transportation problem but also a security, one stressing that banning them without proper alternatives to the many socio-economic roles they played such as providing employment and convenient and affordable transportation might not be the right long-term solution.

She added that an outright ban could give rise to social vices among the youth and that it needed a carefully thought through approach which involved all stakeholders.

The Central Regional officer of the National Road Safety Authority (NRSA), Ms Linda Afotey-Annan, said there was unfortunately still no regulation for the pragya.

She explained that though all such vehicles were registered for private use they were being used commercially.

She said there was no regulation on age limit for riders, licensing or training.

Ms Afotey-Annan said considering their numbers and use, the NRSA would continue to sensitise and educate users on road safety and work to ensure they were properly trained, licensed and regulated.

The NRSA’s sensitisation plan notwithstanding, last Monday the Central Regional Police Command arrested more than 60 of the tricycle riders in the Cape Coast Metropolis, including those below 18 years, as part of measures to clamp down on their illegal activities.

The offenders were processed for court last Tuesday for various traffic offences, including driving without license and insurance certificates.

The Central Regional Police PRO, DSP Irene Oppong, said the exercise had become necessary to clamp down on their activities, stressing that most accident cases recorded in the region were pragya-related.

She added that the offenders could face 25 penalty units, 30 days or both.

Mrs Oppong indicated that the tricycles were not meant for commercial purposes as spelt out by LI 2180 Regulation 128.

She called on the various traditional leaders to intervene in the fight to clamp down on the activities of the Pragya riders.

She said the campaign could yield better results if the chiefs added their voice and enforced by-laws in their various jurisdictions.

"We would appeal to the chiefs to support us in this fight," she said.

She called on the public to refrain from patronising the tricycles, adding that "If the public refuses to patronise them, they will fold up on their activities.”

Some taxi drivers in Cape Coast, however, decried the operations of tricycle riders, saying they were gradually pushing them out of business, which they found very worrying.

A taxi driver, Mr Samuel Mbirika Essoun, observed that the introduction of these tricycles in the region without proper regulation marked the beginning of a crisis for taxi drivers, emphasising that commuters now had little regard for taxis.

“Gone are the days when I made between GH₡150 and GH₡200 in sales but these days you can drive around the whole town and come home empty handed because of these pragya riders.

“Even though they don’t have the license to operate, they have taken over our job and those of us with licenses are now useless,” he lamented.

Mr Essoun observed that the pragya riders flouted traffic regulations with impunity and caused so much inconvenience on the roads, a situation which he noted needed urgent attention to avoid any unfortunate occurrence on the roads.

“I particularly want to appeal to the Motor Transport and Traffic Department (MTTD) of the Ghana Police Service to introduce laws that would regulate how the pragya operators ride about in town because we can’t sit down and watch them continue misbehaving on the road,” he said.

On the education front the presence and boom of pragya is both good and bad.

While it serves as transportation for many children who otherwise would have travelled long distances to school on foot, the business is also enticing many young boys to drop out of school.

The Cape Coast Metropolitan Director of Education, Ms Dorcas Brenda Asare, at a recent stakeholders' meeting on education expressed concern about the menace, saying young people in the metropolis were dropping out of school to take to the pragya business.

Indeed, some of the tricycles are driven by very young lads.

These young boys, mostly between the ages of 16 and 20, start work as early as 5a.m. and operate till night.

Although for these boys, the pragya business seems to pay off, most of them get into the business at the expense of their education.

Interacting with some of the riders, they indicated that the business had come to ease their economic burden.

Eighteen-year-old George Asemani, a tricycle rider who spoke to the Daily Graphic, said he had opted for the pragyia business to sustain himself.

“I was in JHS 2 when I dropped out of school and the pragya business has been good so far,” he said.

He, however, added that he had the urge to go back to school should he get adequate support.