Parliament has proven GLC was unfair to us- Aggrieved law students 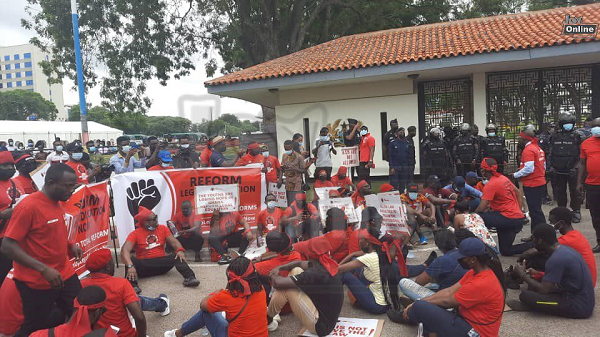 The group of 499 law students who are battling for their admission to the Ghana School of Law says Parliament’s directive to the General Legal Council to admit them confirms their strong belief that the GLC had been unfair to them.

According to the group, the position taken by Parliament gives a huge boost to their challenge of the GLC’s decision not to admit them.

Parliament has by a resolution, directed the Ghana School of Law (GSL) to admit all 499 students who passed the recent entrance examination but have been denied admission.

The resolution was passed on Friday, October 2021 by Parliament.

The 499 students sat and obtained the 50 per cent or better pass mark advertised for entrance exams to pursue a professional law programme at the school.

“The General Legal Council is directed to proceed and admit all the students who passed the entrance examination in accordance with the advertised rules of the examination,” the House directed.

The House, which was presided over by the First Deputy Speaker, Mr Joseph Osei-Owusu, also directed the Attorney-General and the Minister of Justice, Mr Godfred Yeboah Dame, to ensure that the resolution passed by the House was implemented.

“As for the Attorney-General, we can always call him here to answer; he is actually the minister responsible under the General Legal Council Act for ensuring that the proper thing is done,” Mr Osei-Owusu said.

Welcoming the development on Accra Based radio station, Citi FM on Friday, a representative of the aggrieved students, Daniel Sackey commended Parliament for the directive.

He however prayed justice will be served, “We are so happy, and we pray that justice will be served… The Members of Parliament who directed the General Legal Council to do the needful are representing Ghanaians and their unanimous decision shows that Ghanaians are not happy with the unlawful nature in which the GLC is denying the 499 students admission even though they have passed their exam,” he said.

He added that they will get the parliamentary Hansard of the day and attach it to their case in court challenging the decision of the GLC.

“We are in court, and we will do everything possible to make sure that justice is served. We applied for the parliamentary Hansard, and we will add it to our evidence to make our case that even Ghanaians have spoken, and they are aware of the illegality being perpetrated against us. We are yet to meet our lawyers. Whatever he gives, we will go by it,” he stated.

Admit all 499 students - Parliament to Ghana School of Law