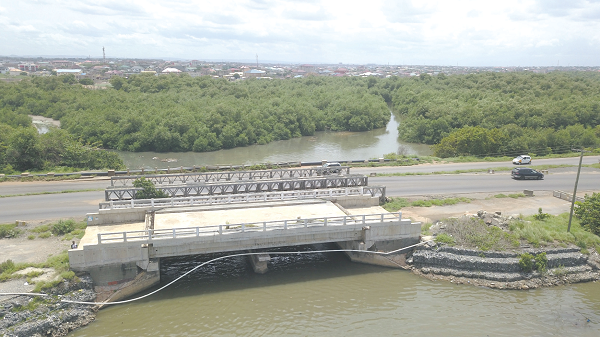 A prefabricated bridge over the Kpeshie Lagoon at La in Accra

Parliament has approved a loan agreement of £48.3 million to finance the design and delivery of 89 prefabricated bridges for selected locations across the country.

The facility, which is made up of £41.2 million and £6.5 million lots, is an agreement between the government and Standard Chartered Bank, London, the agent, arranger and structuring bank, with the UK Export Finance as the guarantor.
The agreement was presented to Parliament on June 23, this year by the Deputy Minister of Finance, Mrs Abena Osei-Asare, on behalf of the Minister of Finance, and the Speaker referred it to the Finance Committee for consideration and report.
Object of the loan
Presenting the report, the Chairman of the Finance Committee, Dr Mark Assibey-Yeboah, said the loan would finance the design and delivery of 89 prefabricated modular steel Mabey Bridges as bridge superstructures for the Ministry of Roads and Highways.
He said the project would have a depot at Akyem Kukurantumi.
Rationale for the loan
The committee, Dr Assibey-Yeboah said, considered that some sections of roads and old wooden and steel bridges were damaged in a number of rural areas, making many roads impassable, especially during the rainy season.
Besides, there were about 10,000 km of tracks which could not be improved without the installation of critical bridges or culverts, he added.
He explained that “the Department of Feeder Roads has identified about 5,000 water crossing points in a very poor state, thereby hampering the improvement of some of the roads for rural dwellers and communities”.
“The poor state of the roads has led to loss of valuable productive work due to long travel time, increase in transport cost, disruption of international vehicular traffic to landlocked countries, fatigue, stress and frustration of the travelling public for the long travel times through alternative routes,” he pointed out.
Dr Assibey-Yeboah noted that the committee was also informed that some areas had been tagged as “overseas areas” in some regions as they were inaccessible due to the lack of bridges.
It was to address the bottlenecks on the roads that the government was procuring prefabricated modular steel bridges to be constructed in 89 selected locations, he stated.
Benefits of the project
According to him, the benefits to be derived from the project were increased access to hospitals, schools and other social facilities as well as improved movement of goods and people within the identified areas.
It will also promote socio-economic impacts and improve the living conditions in the beneficiary areas, Dr Assibey-Yeboah said.
topstories