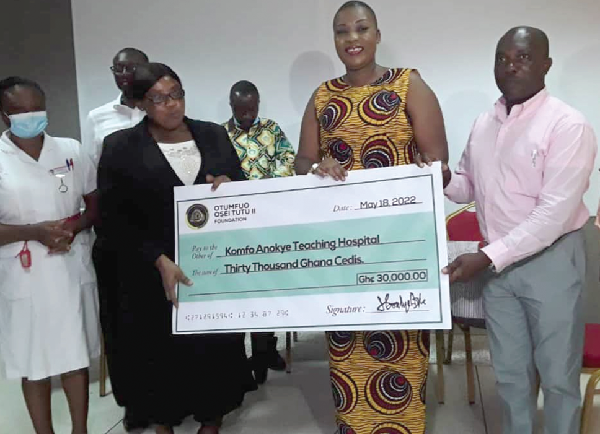 Georgina Efua Sam (2nd from left), Director of Nursing at KATH, receiving the cheque from Nana Afia Kobi Prempeh, Executive Director of the Otumfuo Foundation. On the right is Kwabena Owusu Ababio, a member of staff of the foundation Follow @Graphicgh

The Otumfuo Osei Tutu II Foundation, in partnership with Lady Julia Osei Tutu, the wife of the Asantehene, has settled the medical bills of 27 mothers and their babies who were detained at the Komfo Anokye Teaching Hospital (KATH) for their inability to settle their bills.

The mothers were also presented with hampers and cash to enable them to go back home.

It was an emotional scene to witness at the Conference Hall of the Accident and Emergency Unit of the hospital last Wednesday when the foundation paid GH¢30,000 to offset the medical bills of the beneficiaries, who were on admission at the Obstetrics, Gynaecology, Internal Medicine and Child Health and Surgery departments.

Some of them could not hide their emotions as they wept in appreciation of the gesture.

A beneficiary, Cynthia Awuni from Prestea Nkwanta in the Western Region, who had been on admission for some months after a successful surgery had been performed on her son, told the Daily Graphic that she had accumulated debt of over GH¢4,000 and did not know how she was going to settle the bill.

The Executive Director of the Otumfuo Foundation, Nana Afia Kobi Ampem Prempeh, who made the presentation, said among its objectives was to bring hope to the poor and the needy and also promote the education and well-being of the people.

She said the donation formed part of activities to commemorate this year's International Day of the Family, which came off on May 15, 2022.

Ms Prempeh further explained that the gesture was to enable the mothers and their children to return home to their families after their long stay at the hospital due to their indebtedness.

She appealed to corporate Ghana to partner the foundation to extend more support to others who were in a similar situation and also undertake other charity works.

Ms Prempeh advised the beneficiaries to take good care of themselves and their kids to ensure they stayed healthy and safe.

On behalf of her fellow beneficiaries, Ruth Yeboah expressed appreciation to the foundation for the assistance and prayed for God’s blessing for its management.

The Director of Nursing at KATH, Georgina Efua Sam, said as a tertiary facility, the hospital did encounter challenges of patients’ inability to settle their bills after treatment, saying that sometimes it was compelled to discharge such people.

She said some of the “discharged but detained” mothers occupied beds that could have been used to treat other patients in need, thereby depriving such people in need the use of the beds.

“Although they are discharged, they are detained because they have not been able to settle their bills, and due to the condition of some of them, we are unable to reassign their beds and make them sleep on the floor,” Ms Sam added.