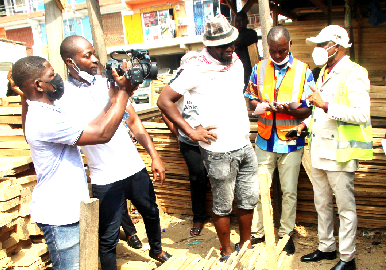 More than 60 residents and shops owners within the Kwatsuru electoral area of the Ayawaso North municipality have been summoned by the assembly for unclean surroundings.

They were summoned during an exercise to pilot the Operation Clean Your Frontage initiative aimed at keeping Accra clean and greening portions of the environment.

The offenders, who had choked gutters, pile of rubbish and filth in front and around their households have been directed to immediately clean their surroundings and report to the assembly later.

The initiative was launched in October last year and makes it mandatory for property owners of residential, private and public institutions and the citizenry to clean and green their frontages and all open spaces around their property.

Already, bye-laws for the enforcement of the campaign have been passed, officers have been employed and trained to enforce the bye-laws, including the arrest and prosecution of offenders.

The Municipal Chief Executive of the assembly, Mr. Aminu Mohammed Zakari, who led the exercise last Tuesday, said the aim of the exercise was to sensitise the residents about the initiative and also enforce the assembly’s sanitation bye-law.

Mr. Zakari, however, commended residents with clean surroundings, and urged them to maintain good sanitary practices to avoid being prosecuted.

He said the Operation Clean Your Frontage initiative would deploy the use of multiple approaches such as campaigns for attitudinal change, enforcement of bye-laws and logistics to drive residents not only to keep their immediate surroundings clean, but beautify them.

Mr. Zakari said a moratorium of two months was given since the launch of the initiative in October last year to educate the public before enforcement of the laws began.

He explained that one of the sanitation bye-laws directs that “property owners or an occupier of a residential premise to ensure that the drains, frontage, surroundings and up to the middle of the road are clean and kept neat at all times”.

“On February 1 which is the deadline given for full enforcement to begin, we will not spare anybody, the operation has come to stay so we are cautioning people to comply.

“We will continue with the education and enforcement. Every household must clean their surroundings, that is the law and the assembly will stick to it and apply the law,” he reiterated.

Meanwhile some residents who were summoned told journalists that although they were aware of the initiative and were adhering to the directive, the actions of other residents who flout the law affected them since they lived in the same vicinity.

They, therefore, urged the assembly to intensify the education to prevent them from being prosecuted for the bad deeds of others.

However, those who were summoned promised to adhere to the directive and to keep their surroundings clean at all times.