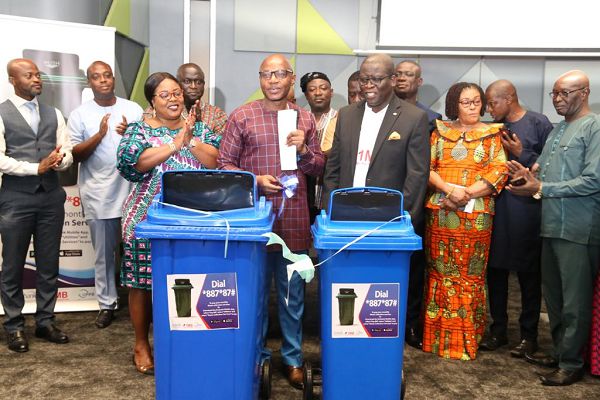 A one million-waste bin project has been launched in Accra, as the move to rid the country of filth receives a major boost.

The project aims at distributing one million waste bins to households and businesses in all cities and communities across the country to reduce indiscriminate littering and promote good health practices.

Among other things, the initiative will also take education on proper waste management to the doorstep of people.

Ecobank Ghana Limited is the financier of the $10 million project, with Universal Plastic Products and Recycling (UPPR) Ghana Limited and the Environmental Service Providers Association (ESPA) as the collaborators.

The waste bins, which are being produced by UPPR Ghana Limited, are fitted with Radio Frequency Identity (RFID) tags that allow waste management companies to closely monitor and track the clearing of waste by its workers.

For instance, the waste management companies are able to track how often waste bins get full and how regularly they are emptied.
The RFID system is to prevent the situation where waste bins overspill and pollute the environment.

As part of arrangements to ensure effective clearing of rubbish that will be generated, a digital payment platform, dubbed ‘Ecobank waste collection payment platform’, was also launched at the function.

Present at the launch of the two initiatives were the Deputy Minister of Sanitation and Water Resources, Mr Michael Yaw Gyato; the President of the ESPA, Mr Joseph Siaw Agyepong; the Executive Secretary of ESPA, Mrs Ama Ofori Antwi; and the Managing Director of Ecobank, Mr Dan Sackey.

It was also attended by Members of Parliament (MPs), metropolitan, municipal and district assemblies (MMDCEs), and civil society organisations (CSOs).

Mr Gyato, who launched the project on behalf of the Minister of Sanitation and Water Resources, Ms Cecilia Abena Dapaah, said the project was a major boost to the government’s agenda to make Accra the cleanest city in Africa.

He said although the water sector had received massive investment from development partners, the same could not be said about the sanitation sector.

“We urge other financial institutions and corporate institutions to follow this good example and invest in the sanitation sector because the best way to solve our health problems is to address the problem of sanitation,” he said.

The Deputy Minister also urged members of ESPA to put in place mechanisms to ensure that waste that would be generated was promptly cleared so that it did not create health challenges.

Mr Sackey said Ecobank’s decision to provide financial support for the project was because of the priority it placed on environmental sustainability and good health.

He said the digital payment platform deployed by the bank would help clients to pay for services that would be rendered to them in the waste management value chain.

“As a partner, Ecobank is deploying its digital solutions to enable clients of waste management companies to pay their monthly collection service fees with greater convenience,” he said.

For her part, Mrs Antwi called on all stakeholders in the waste management value chain to play their respective roles to ensure that the sanitation challenge was tackled head-on.

She called on MMDCEs and others stakeholders at the local level to support the initiative to ensure that all households and businesses took advantage of the project.

“The absence of waste bins in our households, workplaces, lorry parks and other public places has been the major reason for the indiscriminate littering in our communities. We, therefore, embarked on this project with the aim of changing the situation and keeping our environment clean,” she said.

She said apart from helping the metropolitan, municipal and district assemblies (MDAs) to deal with filth, the project would also create over 1,000 employment opportunities along the value chain.