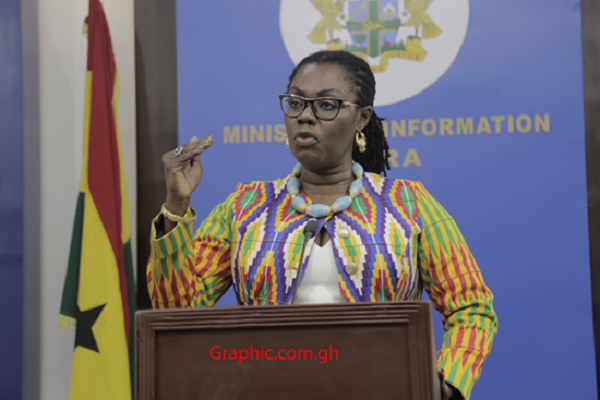 From January next year, all workers in the public sector and state institutions will connect to a smart workplace common platform for all official communications.

The key public infra structure, being operated by the National Information Technology Agency (NITA), is a security solution that will help agencies in the public sector encrypt government data in storage or transit for protection.

Consequently, the government has directed that after the connection, the use of private or personal emails for official business in all public sector agencies should cease.

The Minister of Communications and Digitalisation, Ursula Owusu-Ekuful, who gave the directive at the Technology Breakfast Meeting with public sector executives in Accra yesterday, said the decision was to ensure continuity at the workplace and track official correspondence work trail in the public sector.

“We will start by ensuring that all heads of institutions in the public sector connect to a common official email platform.

“Public sector heads of departments who do not comply with this directive by January, next year risk losing their jobs,” the minister warned.


The smart workplace platform provides all government agencies, such as ministries, departments and agencies, with an email system, a calendaring system, Microsoft teams for conferencing, Microsoft office suite and other collaborative tools.

Mrs Owusu-Ekuful said the measure was the only way to enhance effectiveness and transparency and reduce corruption in the public sector.

She said when public sector institutions adopted the common platform, it would ensure continuity at the workplace, and that even after staff assigned the original email address had left the service, work trail could be tracked.

“You chief directors and chief executive officers present here today are key stakeholders in achieving a digital public sector and, by extension, a digital Ghana.

“Your leadership and support in driving the needed reforms that come with the introduction and use of digital initiatives are key.

“You will have to lead by example and set the right tone for your staff to understand and appreciate the reforms being rolled out”.

Mrs Owusu-Ekuful said the government would support NITA to regulate the information and communications technology (ICT) sector effectively, starting with the public sector.

She cautioned users and managers of the system to be guided by standards and specified operating protocols to minimise risks such as cyber attacks, data loss, breaches and leakages and system outages.

The Director-General of NITA, Richard Okyere-Fosu, said the country had faced a surge in cyber incidents as reliance on ICT increased.

“These attacks have affected various sectors of the economy, including energy, telecommunications, banking and finance, all causing further disruptions to the delivery of essential services,” he said.

He said the smart workplace platform was, therefore, expected to combat cyber crime and provide dedicated platforms for correspondence and communications in the public sector.

“This platform is able to learn and report the activities of hackers even before they are successful and provide you with tools to prevent breaches,” Mr Okyere-Fosu said.

He said NITA, through the eTransform Project under the Ministry of Communications and Digitalisation, had completed a procurement process to provide connectivity for government agencies for a 10-year period.

The project was expected to connect district assemblies, hospitals, police stations, post offices and other government agencies around the country and provide stable and reliable connectivity for those agencies, he said.

The Director-General of the State Interest and Governance Authority (SIGA), Edward Boateng, said the adoption of the smart workplace platform by the public service would improve efficiency and productivity and contribute to the country’s gross domestic product (GDP).

“It is important for public sector agencies, particularly SOEs, to adopt the workplace platform and align what they are doing, so that the work trail can be tracked to ensure system continuity,” he said.

Mr Boateng backed sanctions for public sector workers who used personal or private emails for their official correspondence and communications.

The Head of the Civil Service, Nana Kwasi Agyekum Dwamena, said the Civil Service had already adopted the smart workplace platform, which had resulted in efficiency and productivity in the service.