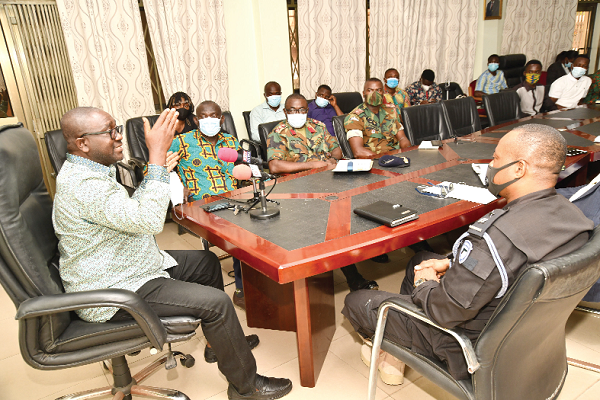 The National Media Commission (NMC) will deploy a mobile application (App) that will enable it to determine the circulation of fake news and help in the electoral process during the forthcoming general election.

The move is to ensure the conduct of peaceful, credible, free and fair elections in the country.

Known as the Ghana Elections Monitoring App, the software, for instance, shows the exact location and time videos are taken to determine their authenticity or otherwise.

“Every citizen can contribute towards the monitoring, but in addition to that, all the stakeholder institutions have the opportunity to use the app to do their work. So it helps us address questions of disinformation and fake news.

“If somebody submits a material about something happening at a polling station and it is not true, the system enables us to know in real time that this is not true,” the Executive Secretary of the NMC, Mr George Sarpong, said at a meeting with some stakeholders to introduce the software to them in Accra yesterday.

The software was developed by Soft Masters, a private company, in collaboration with the NMC, to monitor the elections.

The GJA, the NCCE, GIBA and the NCSALW pledged their commitment to the initiative, while the representatives from the remaining institutions said they needed to go back to inform their authorities, after which they would revert to the NMC.

Mr Sarpong told journalists after the meeting that the App was an upgrade over the previous monitoring system the commission deployed for previous elections, adding that “this time it enables us to bring on board all other stakeholders”.

“It is both for media monitoring and incident monitoring across the country. On the media side, what this does is to give an opportunity to every citizen to submit any kind of complaint; anybody who has a grievance about the media can submit that for consideration and analysis,” he said.

He indicated that the new system would enable the military and the police to quickly verify publications related to them to ensure prompt responses.

“If there is any story related to small arms, the NCSALW is able to pick that up and put in the necessary interventions. The EC can rely on this to see areas where it needs to respond to issues of delay in the supply of ballot papers or materials, and the police can use this to track violence at polling stations,” he said.

The NMC Executive Secretary described the App as a “total monitoring system that enables all of us to contribute towards credible elections in the country”.

The Chief Executive Officer (CEO) of Soft Masters, Dr Ben Adu, said the application would be rolled out in the next three weeks.

He said the system would allow every mobile phone to capture videos and pictures but time-stamp each picture or video with the time and location, both the GPS location and the address, if there is one,” he said.

He said once such a system was put in place, it would deter people who wanted to churn out false information because they would know that there were hundreds of phones that would capture them.

Dr Adu indicated that institutions that would act on information that would be provided were being assembled, so that they could act promptly, adding: “We just built it to help with our social responsibility. We did it in conjunction with the NMC, which is sponsoring it and bringing all the groups together.”

He explained that if the GJA was going to accredit some journalists, they could register, so that when the journalists sent information, “we will know that this is the source and so this is beyond doubt.”

The software will be test-run in the next three weeks, after which it will be rolled out.