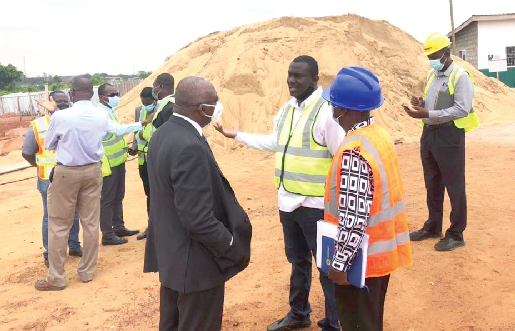 The construction of the new campus for the Ghana School of Law (GSL), which has the capacity to admit 2,000 students, is progressing well, contractors of the project have assured.

The contractor, Joberg Ghana Limited, is currently 70 per cent done with work on the foundation or the substructure of the project.

This came to light when the Director of the GSL, Mr. Kwasi Prempeh-Eck, and his team last Tuesday paid a visit to the project site, opposite PRESEC, Legon, on the road to the University of Professional Studies, Accra (UPSA).

Dubbed the GSL Law Village, President Nana Addo Dankwa Akufo-Addo cut the sod for the commencement of the first phase of the project valued at $4 million on May 23, this year and it is expected to be completed in May, 2023.

With the brouhaha over admission of students to the GSL, the GSL Law Village is expected to expand access to legal education and it is seen as one of the solutions to the perennial problem of the inability of the GSL to admit thousands of LLB holders desirous of pursuing professional legal education.

Mr. Prempeh-Eck told the media that the GSL was not deaf to the concerns raised about access to legal education.

He said the Law Village project and the opening of satellite campuses were all part of efforts by the GSL to increase access to professional legal education in a manner that would not compromise quality.

“We have Accra main campus, another campus at Kumasi and GIMPA and now we have opened a new campus at UPSA to help us accommodate the numbers.

If a student passes the entrance exams, he will be admitted to the law school, at the same time we are also making plans to increase access,” he said.

With regard to the 499 students who were refused admission to the GSL on the basis that they failed to obtain pass marks in both the objective and written part of the entrance exam, Mr. Prempeh-Eck said the matter was currently before the courts, and therefore he could only comment after a determination by the courts.

When asked if the GSL could one day consider allowing the faculties of law in the country run the professional law course, Mr Prempeh-Eck said it was currently being discussed.

“That is a plan that is being discussed between the General Legal Council and the Deans of the Law Faculties. If you are trying to change a system that has been in existence since 1960, it cannot be done overnight.

This discussion has gone on for quite a while and it is left with implementation. Many questions linger on. How many of the faculties are ready? Can we absorb all students etc. We cannot just change the system overnight because we are dealing with people, resources and the general direction of legal education,” he said.

Guarantee
The Chief Executive Officer of Joberg Ghana Limited, Mr. Joseph Magnus Marteye, said the project was on course and was expected to be completed within the stipulated time frame.

“Currently, the substructure is what is ongoing, we are 70 per cent completed and as you know construction relies on the substructure. When that is completed, the remaining job will not be much of a problem,” he said.

He, however, called on the government to intervene and provide a guarantee to enable his outfit to source loans to execute the project without any hindrance.

According to him, under the current arrangement, the project was purely funded by the GSL through its internally generated funds (IGF), but Joberg is supposed to pre- finance and be reimbursed by the GSL twice a year (every six months).

“We have to pre-finance but that has to be done through borrowing from the banks. The government is supposed to give us a guarantee to help us raise funds, but we have not yet received it, so we are using our IGF for the project as we wait for government to give us that guarantee. We are also waiting for the GSL to start taking school fees so that we will be paid,” he said.

He explained that a guarantee from the government would quicken the pace of the project as it would enable his outfit to source for funding within the shortest possible time.

“However, this does not stop us from doing what we must do. We have a timeline of 24 months and we will still meet the timeline so long as the Ghana School of Law pays us every six months,” he added.