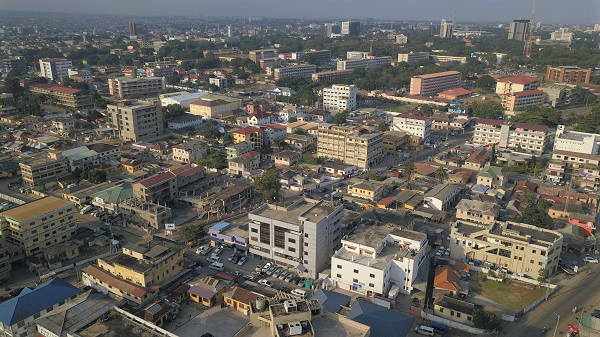 The city of Accra
30.5k Shares

Accra, Ghana's capital, is “severely fatigued”, for which reason a new administrative capital is critical, the Omanhene of the Agogo Traditional Area in the Ashanti Region, Nana Kwame Akuoko Sarpong, has opined.

Such a new capital should not be immediate but a long-term national transformational enterprise of even up to 50 years and devoid of partisan politics, he added.

The 83-year-old Omanhene, who is celebrating 45 years on the Kyei ne Krobon Stool of Agogo, was sharing his thoughts with the Daily Graphic on the country's development trajectory, 64 years after independence.

A lawyer by profession, Nana Sarpong, who has played a great role in Ghanaian politics, was the Popular Front Party (PFP) Member of Parliament (MP) for Asante Akim North (1979-1981), the Provisional National Defence Council (PNDC)

He became the Presidential Advisor on Chieftaincy Affairs when the country transitioned to constitutional rule in January 1993 and was a member of the Council of State during the Prof. J. E. A. Mills administration.

Nana Sarpong said Ghana must emulate the examples of other countries that had moved their national capitals to new areas as a result of chronic congestion and associated developmental challenges.

“It is time for the government to take bold steps at creating a new administrative capital for the country to solve the chronic congestion and related development challenges Accra has been subjected to and which make the future even more daunting,” he said.

While he had no problem with Accra becoming Ghana’s commercial capital, he insisted that the administrative capital should move inland, noting that he supported Kintampo, which is 431.1 kilometres north-west of Accra, and Yeji, a waterfront town about 453km north of Accra, as being worthy of consideration for the new national capital.

The call by Nana Sarpong came on the back of a similar suggestion on January 10, 2018 by a consulting engineer and city planner, Prof. Nii Odartei Mills, who cited the poor state of the national capital as basis for his call.

Although he did not name any particular place for development into a new national capital, he argued that poor planning, indiscipline and congestion in Accra were enough bases to have a new befitting capital.

“Let us have a capital that we can be proud of and be able to call our own. The rational way of doing that is move to a place, a quiet virgin where we can actually have a lot of land. I am not going to name a particular place, but where we Ghanaians can be proud of,” Prof. Mills had told Accra-based Class FM.

Stressing that Accra was not planned, and that the city was terribly choked, Nana Sarpong said the irony of the situation was that “we seem not to have answers to this”.

In his view, no amount of borrowing would solve the problem.

“Accra was not planned; it has been subjected to annual flooding and other development setbacks and no one seems to be having the planning answer to these. We must be planning for the next 50 years or even more for a new administrative capital,” the Omanhene stated.

Making reference to the Nigerian example, he said when that country found that Lagos was not fit to remain the capital, Abuja, 300 miles north-east of Lagos, was chosen and developed as the administrative capital

“As Nigeria did with Abuja, ours should also be a long-term project backed by proper planning,” he said.

Nana Sarpong also wanted firm action on the redevelopment of the railway infrastructure, saying that it should be linked to the exploitation of iron ore reserves.

He recalled that President Nana Addo Dankwa Akufo-Addo, in one of his State of the Nation Addresses in 2020, mentioned the development of the Oppong Manso iron ore.

On that address, the President had said: “We have decided at long last to explore our bauxite, manganese and iron ore deposits which allow us to establish an integrated bauxite and aluminium industry and iron and steel industry. The Ghana Integrated Bauxite and Aluminium Development Corporation and the Ghana Integrated Iron and Steel Corporation were established by law as the vehicles for this exploitation.

“The process is underway for the selection, this year, of joint venture partners for the development of the full value chain of these two multi-billion-dollar industries which will give a tremendous boost to Ghanaian industrialisation.”

Earlier in 2019, the Majority Leader and Minister of Parliamentary Affairs, Mr Osei Kyei-Mensah-Bonsu, had disclosed that more than 1.7 billion tonnes of iron ore had been discovered in an exploration exercise which was ongoing at Sheini in the Tatale/Sanguli District in the Northern Region, and that by the end of the exercise, the volume of the mineral deposit was estimated to hit three billion tonnes.

Nana Sarpong said to be able to develop the iron and steel infrastructure, “we need to turn to India or China, which have the experience in those areas”.

On redeveloping the railway infrastructure, the Omanhene said fortunately, President Akufo-Addo saw the need to set up the Railway Ministry.

“Of the leaders that we have had so far, Nana Akufo-Addo has not done badly in terms of his idealism and vision for the country, but what we need is action,” he stated.

Over the past years, he said, the country had been reaping the benefits of the investments former President Kwame Nkrumah made.

“That is the kind of bold decision that we need to take. The fear of losing elections must not prevent our governments from taking bold decisions that will benefit the people in the long run,” he said.

Nevertheless, Nana Sarpong said the truth of the matter was that Ghanaians expected too much too soon from the government.