Minister lauds State Housing for good use of IGF 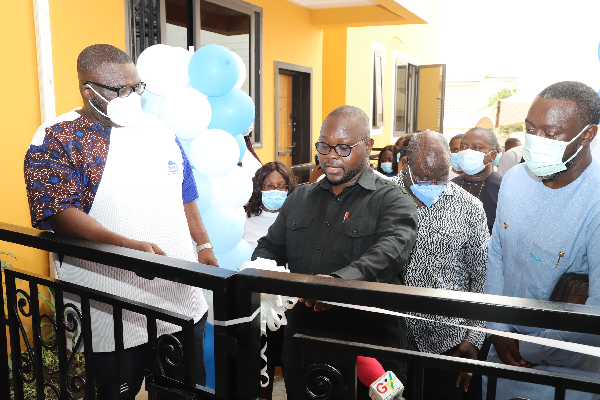 Mr Francis Asenso Boakye (3rd right), the Minister of Works and Housing, being assisted by Mr Kwabena Ampofo Appiah (left), the Managing Director of the State Housing Company, to inaugurate the apartment at North Kaneshie in Accra. With them are Mr Solomon Asoalla (2nd right), the Chief Director of the Ministry of Works and Housing, and other officials. Pictures: GABRIEL AHIABOR
30.5k Shares

For the first time in four years, the State Housing Company (SHC) Limited has constructed a number of housing units in Accra from its internally generated funds (IGFs).

The SHC did not take any loan or support from the government but was able to put up housing units at North Kaneshie and Adentan, both in Accra, through its IGFs.

Consequently, the Minister of Works and Housing, Mr Francis Asenso-Boakye, has commended the state-owned company for the feat and challenged managers and staff not to rest on their laurels.
Mr Asenso-Boakye gave the commendation when he visited the SHC in Accra and later inaugurated a newly constructed 18-unit facility of the company at North Kaneshie yesterday.

He also visited another newly constructed facility of the SHC at Adentan and inspected some dilapidated government bungalows at Roman Ridge, Cantonments and Laterbiokoshie, all in Accra.

Interacting with staff of the SHC, Mr Asenso-Boakye said the strategy of the ministry was to fill the gap in the housing sector.

Currently, he said, there was no clearly defined institutional framework to plan, manage and develop housing in the country, and that everything had been left with the ministry, whose duty was to formulate and implement policies.

As part of the New Patriotic Party’s (NPP’s) manifesto to establish a National Housing Authority, Mr Asenso-Boakye said, the ministry was working towards the setting up of the authority to plan and manage housing development.

The authority, he said, would create land banks and provide amenities, including utilities, which would all go to help reduce the prices of houses to be constructed in such areas by about 50 per cent per unit.

“For the past four years, I think your story has changed. I was happy to hear the managing director give an account of his stewardship. Since he became the MD, the story of the SHC has changed for the better.

“The story of the SHC means that leadership counts and it means that wherever leadership or management works together with hardworking staff, a lot can be done,” he said, adding that “having done all these from your limited IGFs is quite commendable”.

Mr Asenso-Boakye said the President had indicated that affordable housing was a priority for the government, and that was one area the ministry would strongly collaborate with the SHC to provide decent, safe and affordable homes for Ghanaians.

The 18-unit apartment by the State Housing Company at North Kaneshie in Accra.

On the dilapidated government bungalows, he said the Ministry of Works and Housing would engage the Ministry of Finance to make part of the rent paid by occupants of the facilities available for their rehabilitation.

He said the facilities needed to be renovated to save them from total destruction.

“Most of them are in a state of dilapidation because the maintenance culture is zero. One of the primary reasons, I believe, is that over the years, there was no money voted for the maintenance of these bungalows.

“These are facilities that are occupied by government workers who pay reasonable rent below the market rate. Unfortunately, these rents do not come to the ministry; they go to the Consolidated Fund, and so we are going to work with the
Ministry of Finance to make sure that a portion of that is allocated to the ministry’s Public Works Department to maintain them,” he said.

He said the problem had to do with the reorganisation of the Public Works Department to come up with a maintenance plan for bungalows across the country.

The MD of the SHC, Mr Kwabena Ampofo Appiah, said the task given to him when he took over was to transform and make the company a profitable one and build on that to increase the housing stock in the country.

“I am happy to report today that by the grace of God and the help of my management and hard work by the staff, the company has come from one that was barely making it to a vibrant one.

“We are building again; we are profitable and our staff are motivated,” he said.