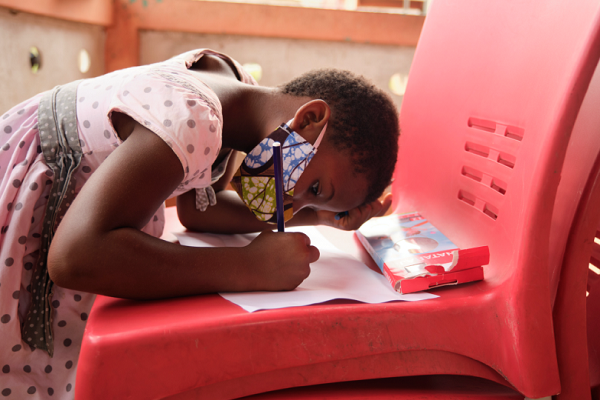 “I am nine and my brother is four. We have not started schooling yet. My mum has promised to enrol us in school soon.

“Every day, I have to take care of my younger brothers until my mum returns from selling chilled sachet water in road traffic before we can have anything to eat. Normally we have just a little to eat only in the mornings and evenings.”

“My mother often brings us along but keeps us under one of the trees in the median of the road while she goes around selling. Sometimes, she keeps too long in returning and my little brother cries uncontrollably when he is extremely hungry and so I often hold his hands while we also beg people in passing vehicles for money so that we can buy something to eat before our mummy comes back from her morning selling.

“Sometimes, we beg for money to buy something to top up the little food mum gave us while she is away selling,”

These are the words of Little Afi, a liitle girl the Daily Grqphic spotted on a few occassions on the N1 highway begging for money with her little brother.

The fate of Afi and her brother are just a fraction of the many Ghanaian children going through such ordeals.

Many Ghanaian children endure a number of deprivations which expose them to tonnes of vulnerability such as malnutrition, sexual abuse, and child labour, among others.

Although children are supposed to be entirely the responsibility of parents and families, due to high national poverty levels, children of school age are seen hawking on streets, begging for money to buy food during a walk or drive through major streets and roads in the country during school hours.

Many of these street and vulnerable children often look tattered, malnourished, stunted.

The United Nations Children’s Fund (UNICEF) has said that in recent years, the world has made remarkable strides advancing development. Yet, more than 700 million people still live in extreme poverty. Children are disproportionately affected. Despite comprising one-third of the global population, they represent half of those struggling to survive on less than $1.90 a day.

Children who grow up impoverished often lack the food, sanitation, shelter, health care and education they need to survive and thrive. Across the world, about one billion children are multidimensionally poor, meaning they lack necessities as basic as nutrition or clean water.

Unfortunately, with barely 10 years to deliver on the United Nations Sustainable Development Goals under which target 1.2 enjoins all member countries, including Ghana, to reduce at least by half the proportion of men, women and children of all ages living in poverty in all its dimensions according to national definitions by 2030, poverty index in the country remain very high.

For Ghana to achieve this, it has to boost national efforts to ensure child poverty is reduced from 73.4 per cent to 36.7 per cent by 2030.

Nationally, poverty is measured in two ways — 2.4 million and about seven million Ghanaians are extremely poor and poor respectively

These vulnerabilities and deprivations of Ghanaian children formed the basis why the National Development Planning Commission (NDPC), in partnership with the Ghana Statistical Service, the Social Policy Research Institute and the United
Nations Children’s Fund (UNICEF) conducted a maiden research to determine the actual situation of child poverty in the country, known as Multi-dimensional Child Poverty in Ghana 2020.

The objective of the research was to provide a baseline data to understand the nature of deprivation and the profile of vulnerable children in Ghana, among other objectives.

The Multi-Dimensional Child Poverty Ghana Report defines multi-dimensionally poor children as children deprived of three or more of their basic human rights, services and needs required for their long-term development and well-being.

The maiden national report established that three out of every four children are deprived of at least three or more basic human rights and needs or several dimensions of well-being making them poor in many ways, a situation the report describes as “multi-dimensionally poor”.

The figure translates into 73.4 per cent of all children in the country. The report said only 2.5 per cent of children were not deprived of any of the eight dimensions of poverty used under the survey while only 8.3 were deprived in only one dimension.

It said also that at the national level, 28.2 per cent of all children were monetarily poor, a phenomenon much common in the rural areas.
Among its 12 recommendations, it called for a multi-sectorial approach through coordinated policy responses that encouraged both the scaling up of specific sectorial interventions and the provision of complementary services by relevant stakeholders.

It also called for an increase in political will to prioritise child poverty issues at all levels through sensitisation campaigns.

Writer’s email: This email address is being protected from spambots. You need JavaScript enabled to view it..
gh